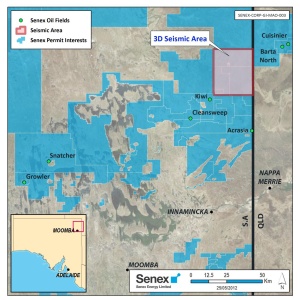 Senex Energy has announced that a 3D seismic survey for three conventional oil and gas prospects has commenced in the onshore Cooper Basin, South Australia.

Perth-based Terrex is carrying out the survey under a A$11m ($10.8m) deal signed with Senex after a competitive tendering process was completed in early 2012.

"Senex is implementing an aggressive growth strategy for our oil business based on the rapid development of known resources and the comprehensive exploration and appraisal of other prospective areas in the Cooper Basin," he added.

"We expect this work in the north of the South Australian Cooper Basin will identify development targets for the short and medium term."

These permits are expected to hold Birkhead Formation stratigraphic and structural traps with the potential to host oil plays observed similar to those at the Growler and Snatcher oil fields in PRL 15 and PEL 111 to the south-west.

Image: Terrex is carrying out a 3D seismic survey for Senex in the onshore Cooper Basin, South Australia. Picture: Senex.