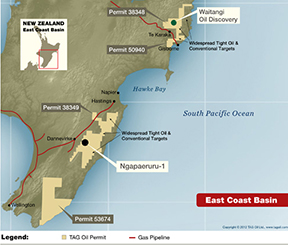 Canada-based TAG Oil has commenced drilling at the Ngapaeruru-1 exploration well, located in the East Coast Basin of New Zealand.

The Ngapaeruru-1 exploration well is targeting the Waipawa Black Shale and Whangai source rock formations at a depth of 1,800m.

During drilling, TAG Oil will test the unconventional discovery potential in both the formations.

"With TAG’s continued success in the Taranaki Basin – and our successful commercialisation of these discoveries – we continue to deliver on the first part of this plan," Johnson added.

"Drilling Ngapaeruru-1 is another step in delivering on our business plan: pursuing these higher risk, higher impact exploration wells from a very strong financial position."

The source rock formations in company’s East Coast Basin play are about 600m thick in some areas, while oil from the naturally-fractured source rocks measures 50 degree API.

In addition, TAG Oil announced on April 2013 that it has completed its Cheal infrastructure expansion project in the Taranaki region , New Zealand.