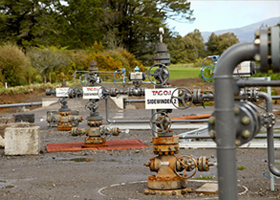 Canada-based TAG Oil has announced that it has commenced drilling of Sidewinder-A5 and Sidewinder-A6 step-out wells in the Sidewinder oil and gas field in New Zealand.

Both the wells have encountered quality reservoir sands in the Mt Messenger formation at about 2,000m depth, while the company has drilled four Sidewinder discovery wells in the field.

The company has initiated a new phase of oil and gas exploration drilling in the Sidewinder field, 22 months after its discovery.

TAG Oil COO, Drew Cadenhead, said the company is continuing with the 13-well Taranaki drilling campaign, where it is drilling Sidewinder-A7 with Sidewinder-A8 to follow.

"We have now tied in Sidewinder-A5 and A6 to a flare tank for clean-up, followed by immediate tie-in to the Sidewinder production station for ongoing production," Cadenhead added.

"These Sidewinder oil and gas discoveries follow on from the original discovery wells drilled in 2010 and 2011, with the Sidewinder-A1, A2, A3 and A4 wells completed as shallow gas wells with associated light oil production."

Sidewinder field is located in the Taranaki production fairway. The company has been drilling the lowest risk shallow Mt Messenger prospects in the field to minimise financial risk.

TAG CEO, Garth Johnson, said the company has found good results in the Taranaki drilling programme and it plans to include more wells with higher impact opportunities.