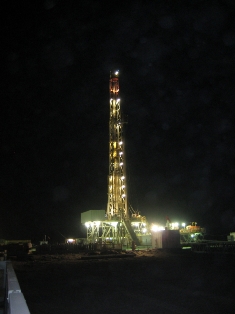 Sweden-based energy company Tethys Oil has drilled the onshore block 4 exploration well 4 (B4EW4) in Oman to a total depth of 3,030m, and has encountered oil in four separate formations.

Tethys said that the results of the testing programme are expected in three months, while wireline logging operations have been completed in B4EW4 well.

The B4EW4 well, located about 20km west of the Saiwan East oil field and was spudded in November 2012 on block 4, based on dense grid of high quality 2D seismic data.

Strong oil shows have been recorded during drilling in the Lower Al Bashair, Buah, Khufai and Masirah Bay formations.

PVT oil samples have been collected during wireline logging operations in the Lower Al Bashir, Buah and Masirah Bay formations, while a testing programme has been designed to evaluate the Khufai and Buah reservoirs.

Before the government took its share, Tethys’ share of the production was 30% of the total or 120,164 barrels equivalent to 3,876 barrels of oil per day.

In January 2013, production at the Saiwan East field was reduced, due to installation of pumps in the wells SE-9 and B4EW3.

Image: Testing programme has commenced and wireline logging operations has been completed in B4EW4 well. Photo: courtesy of Tethys Oil.