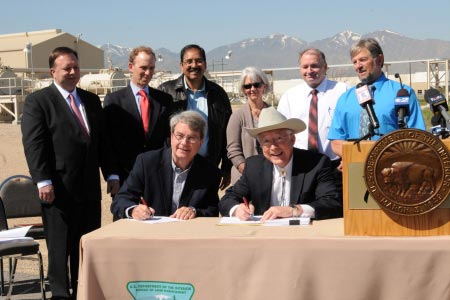 The US Department of the Interior has given the go-ahead to Anadarko Petroleum to begin work on its $10bn natural gas project in the Uinta Basin in the state of Utah.

This federal permission will allow Andarko to develop more than 3,675 new wells over the next decade, and follows a public consultation and stakeholder involvement efforts including approval of environmental groups in the region.

The Greater Natural Buttes Project entails drilling wells in a 163,000 acre region from 1,484 locations, and will bring new surface disturbance to just 5% of that area, the department noted.

US Department of the Interior Secretary Ken Salazar said that President Obama is focused on expanding safe and responsible production of natural gas as part of an all-of-the-above energy strategy that’s cleaner, cheaper, and full of new jobs.

"This agreement is a great example of how collaboration can allow us to uphold America’s conservation values, while bringing growth to Utah’s economy and further reducing our dependence on foreign oil by developing our resources here at home," added Ken.

Bureau of Land Management director Bob Abbey said, "Secretary Salazar’s action today represents the culmination of a comprehensive public involvement effort involving tribes and numerous cooperators at the federal, state and local level to ensure we are addressing environmental concerns early in the process, allowing energy development to move forward with the support of everyone at the table."

Anadarko, which operates around 2,200 wells in Utah, plans to use new technology to drill wells from existing well pads to limit air pollution in the area.

The project is expected to increase the state well count by more than 50% from the present level of about 6,000, though Andarko still needs required permits for each well on an individual basis.

Anadarko has estimated that, when operational, the wells will produce about one billion cubic feet of natural gas a day.