Spectrex has been a provider of optical flame and combustible gas detection solutions for the onshore, offshore, oil and gas, chemical and petrochemical industries for more than 30 years. The company’s services include protection of storage tanks for hydrocarbon fuels and gases, filling operations, aircraft hangars and many other areas where hydrocarbons are used or transported.

The SharpEye series of flame detectors are highly specified and can function to the highest standard even in extreme conditions. This series includes the tripe IR (IR3) multispectrum detector that can detect small fires up to 65m (215ft) away.

The SharpEye 40/40I flame detector has an impressive 65m (215ft) detection distance for hydrocarbon fires, and uses the IR3 technique to provide highest immunity to false alarms.

The detectors have a heated lens for continued availability in difficult environments, and a compact and lightweight design, resulting in low power consumption. They also have the reassurance of many third party approvals:

As a result, the warranty period is extended to a full five years.

The detectors self-test for continuous optimal operation, with interface options including 0-20mA (stepped), HART, dry relay contacts and RS-485 ModBus. They can operate in temperatures between -55ºC to +75ºC, with an option up to +85ºC.

Detection of gas flames, including hydrogen

The SharpEye 20/20MI IR3 detector is designed for hazardous areas, for example floating roof storage tanks. Combined with zener barriers in the safe area, this compact detector offers all the benefits of IR3 technology in a small package, with a detection range of up to 40m (132ft), with stepped mA and RS485 output options.

The SafEye Quasar 900 open-path combustible gas detector series is made up of four models with detection distances from 4m (13ft) to 200m (660ft), and is ideal for perimeter and pipeline monitoring and plant protection. Open-path detectors can replace a number of ‘point’ type gas detectors and provide better coverage.

A heated lens is incorporated for continued availability in difficult environments, with an operating temperature range of -55°C to +65°C (-67°F to +149°F).

Output options include 0-20mA, HART and RS485 Modbus. The standard measuring range is 0-5 LEL.m for C1 to C8 hydrocarbons.

Third party approvals for the Quasar 900 include:

The SafEye 300 duct-mounted open-path detector is a perfect solution for rapid combustible gas detection in air and turbine intake ducts between 0.6m and 15m (2ft-50ft), as it has a high-speed response of two seconds.

The SAFE automatic fire detection and suppression system by Spectrex has recently been installed in Plasan's successful Guarder armored vehicle, helping to secure the 2016 Rio Olympics. 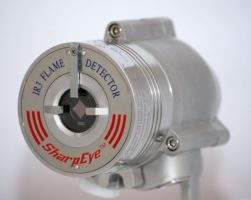 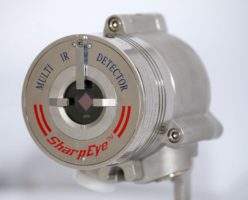 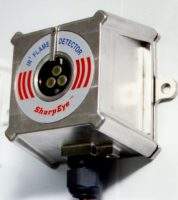 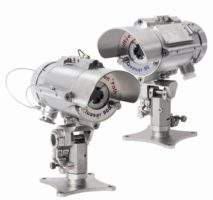 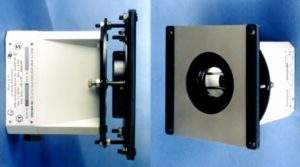 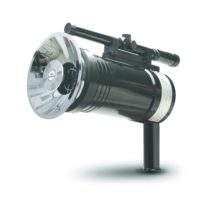 The SAFE automatic fire detection and suppression system by Spectrex has recently been installed in Plasan's successful Guarder armored vehicle, helping to secure the 2016 Rio Olympics.

The Indian Space Agency has chosen to select Spectrex SharpEye flame detectors to provide flame detection within their facilities.

The Gelredome Soccer Stadium in the Netherlands has recently installed Spectrex flame detectors to offer protection at any of their events, ranging from soccer games to cultural events and concerts.

The world's largest oil refinery is expanding its capacity up to 1.2 million barrels per day, and through this, the amount of flame and gas detectors for the whole facility's protection is required to increase.

Spectrex Flame and Gas Solutions to Detect and Protect

Many oil and gas installations, especially oil rigs and floating production storage and offloading (FPSO) vessels, are located in areas with harsh weather conditions, such as in the North Sea or Alaska.

Toxic gasses have a wide range of uses a number of sectors, however they can be very dangerous at high concentrations. In particular, ammonia is an excellent coolant used in food production and storage, and an efficient fertiliser in the agriculture industry.

The Ichthys Project aims to develop a gas and condensate field roughly 130 miles (200km) off the north-west coast of Australia.

SharpEye 40/40I flame detectors were recently installed in a hot oil module in Prudhoe Bay, Alaska.

Spetrex has released details about it's new SharpEye Mini Detectors.

The SharpEye 40/40M Multi IR Flame Detector is unique in being able to detect both hydrogen and hydrocarbon flames simultaneously.

SharpEye chosen by Wintershall for for RAVN Oil Rig

Wintershall has chosen 40/40I IR3 flame detectors to be used on a newly constructed oil rig.

Spectrex can reveal that it's products have been issued with the new hazardous area ex approval, CU TR.

The Kashagan Field, in the Kasakhstan's zone of the Caspian Sea, has invested in over 2,000 SharpEye Triple IR flame detectors.

The NESTE Oil bio-ethanol plant, constructed in the port of Rotterdam, is equipped with SharpEye 40/40I and SharpEye 40/40M optical flame detectors.

Spectrex's SafEye 700 series open path gas detectors have been selected by BP to protect their hydrocarbon storage GDH facility at Fronting, near Montpelier in France.

The new SafEye Quasar 900 Series, with a range of models offering detection path lengths up to 200m, has been fully certified for use in Ex Zone 1 areas to ATEX, IECEx, FM and FMC standards.