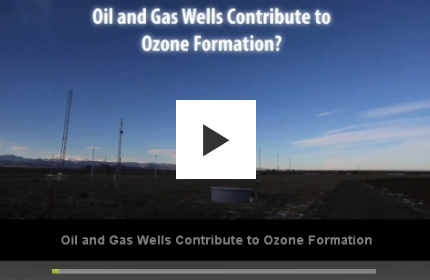 Ongoing work by researchers at the Cooperative Institute for Research in Environmental Studies (CIRES) has discovered a correlation between high levels of volatile organic compounds (VOC), such as propane, found in the atmosphere and the nearby presence of an oil and gas facility. This is could be a major concern, as certain VOCs can react with other gases in the atmosphere to create ozone and / or particles – the principle components of urban ‘smog’ – which degrades air quality.

"Here they found propane, along with other VOCs, to be three to nine times more prominent than in other cities."

CIRES researcher, Jessica B. Gilman, who was involved in the study, says they came across these findings after collecting 550 ambient air samples at the National Oceanic and Atmospheric Administration’s (NOAA) Boulder Atmospheric Observatory (BAO) in the US. Here they found propane, along with other VOCs, to be three to nine times more prominent than in other cities. Eventually they identified a ‘chemical signature’ of VOCs that indicated the high levels were likely to come from a single source.

Gilman says: "We compared the observed chemical signature to the composition of raw natural gas and found a very close match."

Because the site is located 30km north of Denver in the south-western section of Wattenberg Field, which is home to one of Colorado’s most productive oil and natural gas fields, they identified this as the source of the increased levels of VOCs.

"We determined that oil and natural gas activities accounted for 55% of the hydrocarbons that could contribute to ozone formation near the study site in north-eastern Colorado," says Gilman.

The ozone layer is located in the stratosphere 20-40 km above the surface of the Earth and effectively acts as the planet’s sunscreen by filtering out some of the most harmful radiation. Due to its distance from land, people are not directly exposed to high concentrations of ozone.

Ground-level ozone, which these high levels of VOCs can contribute to, can be inhaled into the lungs, which is something that should be avoided as it is a very strong oxidant and can attack certain compounds commonly found in cell walls of both humans and plants.

The oil and gas industry’s connection to ozone formation has been largely under researched – Gilman said during her independent research she was surprised to find little reports on the subject – so the long term health impacts are really unknown.

"The amount of methane, hydrocarbons and non-hydrocarbon gases that are emitted from oil and natural gas operations is a very important topic because it has potential long-term ramifications on climate change and health impacts," Gilman stresses.

"They identified a ‘chemical signature’ of VOCs that indicated the high levels were likely to come from a single source."

"For example, the beneficial reduction in carbon dioxide (CO2) from clean burning natural gas could be offset or even negated by emission of methane, which is the primary component of natural gas and is a much more potent greenhouse gas than CO2.

"Certain natural gas and crude oil reservoirs naturally contain air toxics, such as benzene, toluene, xylenes and hydrogen sulphide that are produced (brought to the surface) along with natural gas. Health may be impacted if a person is overly exposed to air toxics for a sufficiently long time."

Gilman and CIRES will continue their research this summer aboard NOAA’s WP-3D aircraft, which will be based in Nashville. This will afford CIRES the opportunity to analyze the air quality near other active areas of oil and natural gas production, including the Marcellus Shale and Fayetteville Shale.

Buried in the oil sands: the value of Alberta bitumen

Canada is facing major opposition as it moves to export more of its tar sands oil.