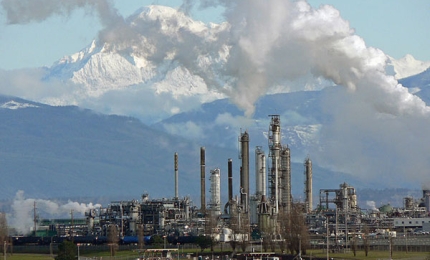 Tesoro Corporation announced a Clean Products Upgrade Project at its Anacortes Refinery in July 2014. The refinery is located in the Puget Sound region, 70 miles (112km) north of Seattle, Washington, US.

The $400m project aims at expanding Tesoro’s product mix, while simultaneously enabling to produce cleaner fuels at lower cost. It will include the construction of a new aromatics recovery unit (ARU) and an isomerisation unit, and expansion of the existing naphtha hydrotreater at the refinery.

In addition, a new marine vapour emission control (MVEC) system will be installed to lower the volatile organic compound emissions and control hydrocarbons emissions from marine vessels during loading.

The estimated cost of the ARU construction is $300m, while that of the naphtha isomerisation is $90m. The project was approved by the company’s board of directors in February 2015 and is expected to be completed between 2017 and 2018, subject to the regulatory permitting process.

The new ARU will have a capacity of 15,000 barrels per day (bpd) of mixed xylenes, which is an important raw material in a number of day-to-day products, including clothing, medical X-ray films, plastics and cleaners.

The NHT will process 46,000 barrels of naphtha a day following the expansion. The capacity addition will help to further reduce the sulphur content in gasoline, enabling the company to meet the latest federal Tier 3 regulations.

The new isomerisation unit will enhance the availability of octane, complementing with the expanded naphtha hydrotreater system to enhance the gasoline production.

The isomerisation and xylenes projects are expected to earn 25% and 20% returns respectively. The xylene produced at the refinery will be used for export purpose, with Asia being the major export destination.

Benefits of the Anacortes refinery upgrade

Since the final produce from the upgraded refinery will be of a higher quality, the state will be able to earn higher revenue by producing and shipping a higher grade product. The new capacity addition is expected to increase the marine shipment traffic at the Anacortes wharf by five vessels a month.

The BP refinery at Whiting, north-west Indiana, US, is the subject of a $3.8bn modernisation programme.

Tesoro will also be able to gain a competitive advantage in the global xylene market, which is growing at approximately between 5% and 7%.

The upgrade will generate 500 construction jobs at peak, and economic benefits to Anacortes and its neighbouring areas. A report published by the Washington Research Council estimates that each direct refining job will generate 11.88 indirect jobs and adds $880,000 of state personal income.

The Anacortes refinery, with a crude oil capacity of 120,000bpd, receives crude feedstock from Canada through a pipeline, from North Dakota and central US by rail, and from Alaska and foreign countries by tankers.

Employing 360 people, the refinery produces heavy fuel oils, liquefied petroleum gas and asphalt. It ships gasoline, jet fuel and diesel fuel to Washington and Oregon markets through a pipeline system that is operated by a third party.

Refined products such as CARB gasoline and its components are transported through Tesoro’s marine terminal to ships and barges.

Tesoro is one of the biggest independent petroleum product refiners and marketers in the US. Its subsidiaries refine up to 850,000 barrels per day (bpd) at six refineries in western US.