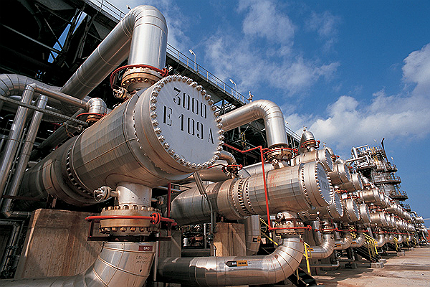 The plant has the design capacity to process up to 450,000 barrels of oil and 8.8 million cubic metres of gas per day. The first oil production at the plant is expected by the end of 2013. The launch of the new processing plant is believed to have created more than 2,500 jobs.

The NCSPSA consortium, comprised of seven partners, is responsible for the appraisal and development of 11 offshore blocks in the North Caspian Sea, which include the Kashagan, Kalamkas, Aktote and Kairan fields.

The operator under NCSPSA is the North Caspian Operating Company (NCOC). The equity interests of the seven consortium partners in the operating company are 16.1% each for KMG (KazMunayGas), Eni, ExxonMobil, Shell and Total, 8.40% for ConocoPhillips and 7.56% for INPEX.

Transferring hydrocarbons from the Kashagan field

Hydrocarbons will be extracted from the field at drilling islands and subsequently be moved via pipeline to hub islands, where recovered liquid will be separated from the raw gas. The hub islands will also have gas injection and power generation facilities.

Separated liquid and raw gas will then be conveyed via separate pipelines to the Bolashak onshore processing plant, where the oil will be further stabilised and purified for exportation and the natural gas will be processed for hydrogen sulphide removal.

The treated gas will be mostly used as fuel for power generation at the offshore facilities, as well as at the processing plant itself, while the remaining will be sold in the market.

"The field is being developed as part of the North Caspian Sea Production Sharing Agreement (NCSPSA)."

The onshore processing plant covers an area of about 9km². The construction of the plant started in 2005.

The civil and mechanical construction works were completed by 2009. The construction involved 50,000m³ of concrete and 60,000t of structural steel. The main pipe rack of the plant involved 20,000t of steel structures.

The electrical instrumentation and telecommunication installation for the plant was completed by 2011. It included 13 electrical buildings (nine substation and four satellite buildings), 5,500km of cables, 5,200 cable coils, 2,700 junction boxes, 220 electrical cabinets and more than 380,000 wiring connections.

The processing facility was introduced with sweet gas from July 2013 onwards, as part of its readiness for production start up by the end of year.

Exports from the Bolashak oil and gas processing plant

The processing plant will produce export quality oil, gas and sulphur. Production from the plant is planned for export both via existing pipelines and rail.

The Western Caspian Pipe Consortium route, connecting Atyrau with Novorossiysk along the Black Sea, the Northern Atyrau to Samara route pipeline connecting to the Russian Transneft system and the Eastern route pipeline from Atyrau to Alashankou, will be used for exports from the plant.

The oil can also be transported via the south-west export route when the Kazakhstan Caspian Transportation System (KCTS) is developed.

North Caspian Constructors (NCC), a joint venture led by Fluor, was awarded the contract for constructing the onshore processing facility.

"The onshore processing plant, built as part of Kashagan project, will process oil and gas from the offshore Kashagan oil field."

Petrofac was awarded the construction management contract in January 2006 for the Kashagan onshore facilities, including the oil, gas and sulphur processing units at Bolashak.

KVL acted as the quality manager for the civil engineering works of the plant.

The Atyrau Refinery modernisation project is being implemented in three phases by KazMunaiGas and is set for completion in 2015.

The 2,798km long Kazakhstan-China pipeline transports crude oil from oil fields located in western Kazakhstan to the Dushanzi refinery located in the Xinjiang Province of China.