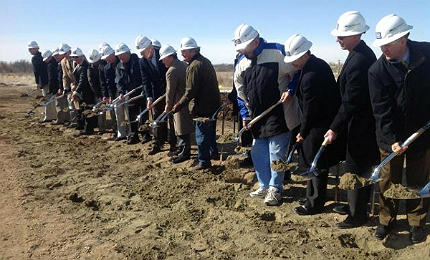 Dakota Prairie Refinery, the second refinery in the state of North Dakota, broke ground in March 2013 and was opened in May 2015. It processes crude oil to produce diesel, as well as other hydrocarbons.

The refinery is located two miles west of Dickinson City in Stark County of south-western North Dakota. It is the first greenfield refinery project in the US since the 1970s.

The refinery has been built and operated by Dakota Prairie Refining, a joint venture between MDU Resources and Calumet Specialty Products, at an estimated cost of $435m.

MDU Resources and Calumet Specialty Products signed a letter of interest to develop the Dakota Prairie Refinery project in 2012. The companies jointly invested $12m for the refinery’s feasibility studies and engineering and design works during the year.

Dakota Prairie Refining, a joint venture between the two companies to develop, build and operate the refinery, was announced in February 2013.

Calumet provides $75m to the project and MDU contributes $150m through its subsidiary WBI Energy. The rest $75m is financed through a loan.

MDU provided part of the crude oil, as well as the natural gas and electricity utilities for the refinery. Calumet procures additional crude oil to run the operations and market the products of the refinery.

The profit from the refinery operation is shared equally between the two companies.

Dakota Prairie Refinery is built on an area of 318 acres just south to the Interstate 94. The site has good proximity to rail, water and electricity as well.

The refinery requires 120gal/min to 150gal/min of water for its operations, most of which is supplied through a pipeline from the new wastewater treatment facility of Dickinson City. The refinery processes 20,000 barrels of Bakken crude oil a day. The crude is supplied via a nearby pipeline, as well as tanker trucks.

The refinery operates as a topping plant and converts approximately one-third of the crude oil into diesel fuel. The rest is further processed in other Calumet refineries. The diesel output of the refinery is marketed in Bakken region.

The refinery produces approximately 7,000 barrels of diesel a day, which reduces the amount of diesel imported into North Dakota.

North Dakota’s annual crude oil production more than doubled between 2010 and 2012 with increased extraction of oil from the deposits of Bakken Formation in the north-west corner of North Dakota. The state accounted for ten percent of the total crude oil production in the US in 2012, making it the biggest oil producing state in America, followed by Texas and the US Federal Offshore region.

“North Dakota’s current diesel demand a day is more than 53,000 barrels, with half of the state’s diesel fuel imported.”

The country produced 770,000 barrels of crude oil a day in December 2012. The use of horizontal drilling and hydraulic fracturing of deposits in the Bakken Formation in the Williston Basin led to the increase of crude oil production in the state.

However, North Dakota had just one refinery at that time; the Tesoro refinery in Mandan. This facility has a processing capacity of 58,000 barrels of crude oil a day. Much of the crude oil produced in North Dakota was being sent to other markets through pipeline, rail and truck.

In contrast, the demand for diesel fuel and kerosene in the state increased significantly. The diesel consumption rose by 51% between 2007 and 2012. North Dakota’s current diesel demand a day is more than 53,000 barrels, with half of the state’s diesel fuel imported.

The scenario created investment opportunities in the refinery business in North Dakota.

A refinery near Trenton in the north-west North Dakota has also been planned apart from Dakota Prairie. The $200m Trenton refinery owned by Dakota Oil Processing is yet to break ground. The 20,000 barrels per day (bpd) Trenton plant will mainly produce light gas oil.

Parkway Pipeline is a 227km underground petroleum product pipeline being constructed in the United States with an estimated cost of $220m.

With the increasing cost of fuel and the desirability of biodiesel, many companies are putting effort into the development of commercial-scale production plants