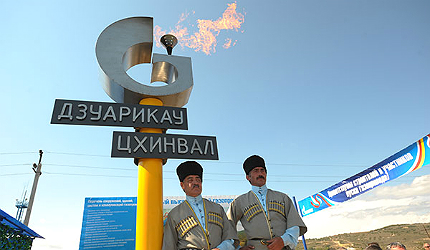 The 169km Dzuarikau – Tskhinvali pipeline is one of the highest in the world, having been built in highlands of more than 1,500m in height. It runs from Dzuarikau in North Ossetia through the town of Kvaisa, to Tskhinval in the South Ossetia region of Russia.

The pipeline was built to improve the reliability and stability of gas supplies to the region. It was commissioned in August 2009 and is operated by Gazprom. It involved an investment of 15 billion rubles ($476m) and has an annual capacity of 252.5 million cubic metres (mcm).

More than 3,000 workers and specialists were involved in the construction of the pipeline.

History of the Dzuarikau – Tskhinvali pipeline

"Construction of a pipeline over the mountainous region of Great Caucasus was the only viable option for uninterrupted gas supply."

Most of the liquefied petroleum gas (LPG) used in the South Ossetia region is supplied by Russia. The gas is supplied through the Tskhinvali gas lateral and the Tbilisi – Kutaisi gas trunkline, which pass through the territory of Georgia.

South Ossetia has been affected by conflicts with Georgia since the late 1980s, as the latter considers South Ossetia to be part of its territory. The conflicts have led to the destruction of infrastructure in South Ossetia and also affected the region’s development.

Georgia has even made attempts to block fuel supplies to the region on the back of these conflicts. The need for a dedicated pipeline to ensure uninterrupted gas supply to South Ossetia became evident due to these conflicts.

The harsh climatic conditions, such as mountainous areas, snowdrifts, avalanches, rockfalls and mountain creeps, made it difficult to construct a new pipeline. Gas supplies could only be assured if a pipeline was built through Georgia. Building a pipeline through Georgia, however, posed a high risk due to geopolitical reasons.

Construction of a pipeline over the mountainous region of Great Caucasus was the only viable option to ensure uninterrupted gas supply to South Ossetia. The Dzuarikau – Tskhinvali pipeline was, therefore, proposed despite the harsh climatic conditions.

South Ossetia has signed a 20-year agreement with Gazprom for gas supplies. In the long-term, the pipeline is expected to improve the living conditions of the people in the region and have a positive environmental impact with the reduction in use of fossil fuels.

Gazprom was also involved in reconstruction of several gas supply facilities destroyed by the Georgian-Ossetian conflict in August 2008. Gas supplies to the region, which were cut off due to the conflict, resumed in January 2009.

Design of the high altitude pipeline

The pipeline has a diameter of 412mm and is designed to be used for 150 years of operation. About half of the pipeline route (75.4km) runs through the mountainous region of the Great Caucasus which is located more than 1,500m above sea level.

The pipeline route includes 15 tunnels spanning 1,848m and 29 water crosses. It spans five mountain ridges reaching a height of 3,148m at the Kudar Pass in South Ossetia. A fibre-optic communication line is built parallel to the main line of the project.

Construction of the pipeline commenced in 2006. Several ecologists initially opposed the construction, fearing that it could damage the ecology of the region.

"It runs from Dzuarikau in North Ossetia through the town of Kvaisa, to Tskhinval in the South Ossetia region of Russia."

Gazprom, however, assured that several studies and surveys were carried out by ecologists and geologists to ensure minimal effect on the environment.

Several sections of the pipeline were welded and laid into trenches one and half metres deep. Construction was carried out in harsh geological and climatic conditions.

Several areas of the region are affected by intense seismic activities, with tectonic faults stretching from two kilometres to 15km in length.

Hazardous areas affected by landslides, mudflows and avalanches stretch for several metres in the region.

Project-Service carried out 3D modelling of gas drying unit, scraper launcher / receivers and other linear pipeline portions of the pipeline.

The 177km-long Dzhubga – Lazarevskoye – Sochi gas pipeline, which was built by Gazprom, was commissioned in June 2011.

Oil and gas pipelines are branching out, as more and more countries rely on imports for their energy supplies. From the Keystone XL to the Rockies Express, hydrocarbons-technology.com lists the longest pipelines in the world.