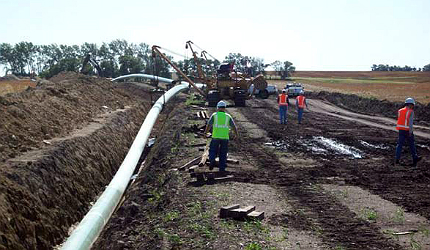 The 780.5km-long Gulf Coast Pipeline was constructed by TransCanada, an energy company based in Calgary, Canada. The pipeline supplies crude oil from Oklahoma to the US Gulf Coast in Texas for refining.

It was originally planned to be part of the US / Canada Keystone XL Pipeline, but was developed as a separate project to avoid the Presidential Permit that is necessary for pipelines crossing international borders.

The US Army Corps of Engineers gave approval to build the pipeline in July 2012. Construction on the project began one month later in August. The pipeline became operational in January 2014. The project involved an investment of $2.3bn.

The new pipeline helps to increase the crude oil supply from Oklahoma to the Gulf Coast marketplace for purification.

"The new pipeline helps to increase the crude oil supply from Oklahoma to the Gulf Coast marketplace for purification."

The Gulf Coast heavy crude pipeline originates from a hub in Cushing, Oklahoma, and then move southward to terminate at a delivery point near oil refineries located in Nederland, Texas. The refined oil is then sent to Port Arthur, Texas, for distribution.

A 76km lateral pipeline has also been proposed as a separate project to carry the Cushing crude oil further to the Houston area. It originates from Liberty County, Texas. It required an additional investment of $300m.

The Gulf Coast Pipeline is made up of pipes measuring 914.4mm in diameter. The initial daily carrying capacity of the pipeline is 700,000 barrels of oil.

The ultimate carrying capacity will exceed the initial capacity by 130,000 barrels of oil each day.

Construction of the Gulf Coast Pipeline

The Gulf Coast project was built in three distinct sections. Work on all the sections was carried out simultaneously for speedy completion. The construction involved the burial of sections of pipe below the ground, to a depth that does not harm the agricultural capability of the soil.

"A 76km lateral pipeline has also been proposed as a separate project to carry the Cushing crude oil further to the Houston area."

In order to build and operate the pipeline safely, the pipe sections were buried on previously acquired permanent rights-of-way with a width of 15m. An additional space of 18m was used as a temporary workspace. Extra temporary workspace was also made available for fluent construction at highway and railway crossings, existing pipeline passageways, river crossings and other important locations.

Once the working surface was cleared, a level work surface was established by removing the topsoil and levelling the undersoil. In the next stage of construction, anti-corrosion coated pipe sections of varying lengths were distributed along the rights-of-way. The sections were welded together using an advanced technology to form a single string.

The pipe was positioned in the ditch dug by excavating machines and the welded joints coated for protection against corrosion. The installed pipe was covered first by the undersoil or the subsoil and then by the topsoil. A total of ten pump stations were built to ensure the continuous supply of crude oil through the pipeline.

"The initial daily carrying capacity of the pipeline is 700,000 barrels of oil."

The Gulf Coast Pipeline system is monitored and controlled from a remote place using supervisory control and data acquisition (SCADA).

Trained pipeline controllers monitor the behaviour of the pipeline 24/7 from an operations control centre, which is equipped with an operational control system, a leak detection system and a communication network that can be controlled through satellite communications.

Proven anti-corrosion technology was employed to prevent corrosion and avoid leakage. Prior to putting the pipeline into service, hydro-testing was conducted to test the physical strength of the pipeline and to ensure there is no leakage.

In addition to employing high-resolution, in-line inspection tools, regular inspections and aerial patrols of the pipeline are carried out to detect any leakage.

Parkway Pipeline, Louisiana to Mississippi, US

Parkway Pipeline is a 227km underground petroleum product pipeline being constructed in the United States with an estimated cost of $220m.

The Port Arthur area is a good location for an LNG terminal as it is one of only a few deepwater ports along the Gulf Coast suitable for receiving LNG tankers.