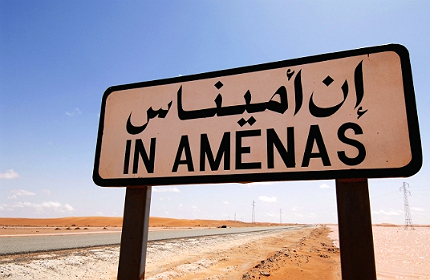 In Amenas is the largest wet gas development project in Algeria. The project includes the development of four primary gas fields in the Illizi Basin in south-eastern Algeria and the associated gas processing facility.

The In Amenas Gas Project, located close to the Libyan border in the Sahara desert, around 1,300km away from the capital city Algiers, commenced production in 2006.

The gas project is owned and operated by a joint venture between Algeria’s state-owned oil company Sonatrach, UK-based multinational BP and Norway’s Statoil. BP and Statoil’s working interests in the project are 46% and 45.9% respectively.

In Amenas produces nine billion cubic metres of natural gas and 50,000 barrels of condensate per year. It accounts for the one tenth of Algeria’s gas output.

In Amenas Gas project comprises of the exploitation of four gas fields, namely Tiguentourine, Hassi Farida, Hassi Ouan Taredert and Hassi Ouan Abecheu in the Illizi Basin of the In Amenas region. The In Amenas fields cover an area of more than 2,750km². The initial natural gas reserves in these fields were estimated at 85 billion m³.

"BP and Statoil’s working interests in the project are 46% and 45.9% respectively."

The $1.2bn first phase of the In Amenas Gas project focused on the development of the Tiguentourine gas field. ENAFOR, a subsidiary of Sonatas, was awarded a contract in 2002 to drill 12 development wells on the field.

The engineering, procurement and construction (EPC) contract worth $745m for the production and processing facilities of In Amenas was awarded in the same year to a joint venture between Japanese Gas Corporation and Kellogg, Brown and Root, a subsidiary of Halliburton.

GE Oil & Gas supplied the gas turbines and auxiliary equipments for the In Amenas gas processing plant under a $70m contract awarded in 2003. The In Amenas facility was brought on stream in June 2006.

The gas produced at In Amenas is marketed by Sonatrach. BP and Statoil are reimbursed with the condensate and liquefied petroleum gas output of the facility.

Gas production infrastructure at In Amenas

The gas gathering system at In Amenas comprises of ten inch flow lines connected to manifold station with each manifold tied to four to six wells.

"The $1.2bn first phase of the In Amenas Gas project focused on the development of the Tiguentourine gas field."

A total of 100km of intra-field pipelines (ranging from ten inch to 24 inch in diameter) were constructed at the In Amenas facility by LEAD, a company based in Syria.

The production facility is connected to the Sonatrach distribution system at Ohanet through three 90km long export pipelines. The diameter of the pipeline carrying dry gas is 36in and the pipes carrying condensate and LPG have a diameter of 12 inch.

A $213m contract was awarded to Japanese Gas Corporation in May 2011, to deliver a compression project at In Amenas by 2013. The compression project includes the construction of two train inlet compressions to the existing processing plant, new slug catcher facility, a permanent accommodation camp and utility buildings.

The expansion project aims at improving the recovery of wet gas at In Amenas that will help maintain its production capacity of 30 million m³ per day for next 12 years.

Petrofac was awarded a three year contract for multidiscipline consultancy, design and procurement services in January 2013, as part of the development programme to further boost up the hydrocarbon production at In Amenas.

The In Amenas gas facility was attacked by Islamist terrorists on 16 January 2013. The workers at the facility, including 48 foreign nationals, were taken hostage by the militants as part of the attack. The gas facility was put under seize by the Algerian security forces for four days. In the process, 40 hostages, including five Statoil employees and four BP employees, were killed.

The processing facility was also partly damaged during the fight between the security forces and the terrorists.

The In Amenas gas facility was shut after the attack. BP and Statoil have withdrawn their employees from the facility until the security situation is thoroughly reviewed.

In the meantime, the expansion projects planned for the In Amenas gas facility have been kept on hold until strict security measures are established by the Algerian state. Any new production from the facility is unlikely until 2014.

In Salah Southern Fields (ISSF) development project is part of the In Salah Gas (ISG) project, which includes the development of seven gas fields located in the Saharan desert in Algeria.