One billion cubic feet of natural gas per day 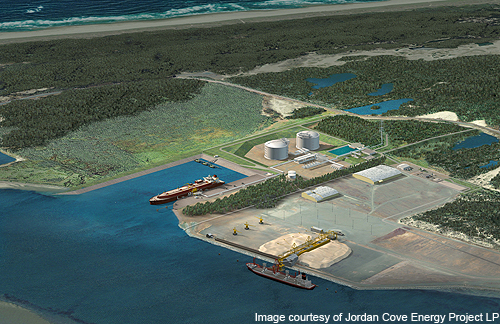 The terminal will be spread over 200 acres. The second project is the 234-mile Pacific Connector Gas Pipeline from the LNG terminal to Malin in Oregon.

The project is being built to provide a natural gas supply to south-west Oregon and the nearby areas.

The region currently imports about 80% of natural gas from Canada. As the population of Oregon is increasing, importing from Canada will not be a feasible option in the future.

The project will fulfil demand for natural gas and also stabilise prices for consumers in the region. It will attract industries to be set up along the route of the pipeline and fuel economic growth.

Construction of the pipeline is expected to generate jobs for 1,400 people. The LNG terminal construction will generate 450 jobs. About 120 direct and related jobs are expected to be generated once the project goes operational.

The application to build, own and operate the project was submitted to the Federal Energy Regulatory Commission (FERC) in June 2013. The FERC-approval is expected to be granted by mid-2014. The estimated investment on the project is $7.5bn.

"The project is being built to provide a natural gas supply to south-west Oregon and the nearby areas."

The Pacific Connector gas pipeline will be 36in in diameter and carry gas from the Jordan Cove LNG terminal to various regions in Oregon.

It will also provide natural gas to the Pacific North-west, California and Nevada.

The pipeline will have the capacity to transport up to one billion cubic feet of natural gas per day.

The pipeline will consist of a compressor station at Medford and two meter stations at Myrtle Creek and Malin. It will be interconnected to other pipelines such as Williams’ Northwest Pipeline and Pacific Gas and Electric’s gas transmission system.

A natural gas-fuelled, combined-cycle power plant with a base-load capacity of 420MW is also planned to be built as part of the project. The power plant will be located adjacent to the LNG facility.

The facility will have two 160,000m³ LNG tanks for storage and a single LNG marine berth. It will feature an extraction facility to recover propane and butane from the LNG. The facility will also have a 32MW integrated electric power plant.

A limited partnership called Pacific Connector gas pipeline has been set up by the companies to execute the project.

In October 2008, Jordan Cove Energy Project signed an engineering, procurement and construction contract with a consortium led by Black & Veatch.

"The pipeline will have the capacity to transport up to one billion cubic feet of natural gas per day."

The consortium will initially develop the design for the Jordan Cove LNG terminal and the cost estimate for the construction of the facility.

Black & Veatch will be responsible for the construction of the marine, re-gasification and other facilities.

Management of the project site and construction of other facilities will be carried out by Kiewit.

Vinci and Entrepose will be responsible for construction of the two LNG storage tanks.

The Jordan Cove LNG terminal will receive natural gas in the liquid state. The natural gas will be delivered by marine vessels from Asia and Africa. The terminal will restore the natural gas to a gaseous state and send it to the Pacific Connector pipeline. The facility will utilise Black & Veatch’s PRICO® LNG technology to produce up to six million tonnes of LNG per year.

The BP refinery at Whiting, north-west Indiana, US, is the subject of a $3.8bn modernisation programme. This includes $1.4bn in environmental improvements.

The Apex Expansion Project included the construction of 28 miles of 38in pipeline called the Wasatch Loop and other facilities in the Kern River interstate pipeline system.