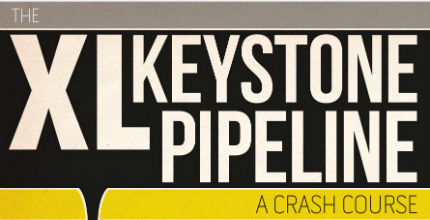 Click here or on the image above to be taken to Keystone XL pipeline infographic – a crash course.

Keystone XL Pipeline is a new 1,897km-long crude oil pipeline being developed by TransCanada. The cross-border pipeline will run from Hardisty in Canada to Steele City, Nebraska, and Texas in the US.

The pipeline has a capacity to deliver 830,000bpd of crude oil and is expected to reduce greenhouse gas emissions by 19 million metric tonnes.

TransCanada is currently undertaking the permit procedure for the project, which will be completed by 2018. Construction for the Keystone XL pipeline project is expected to start in 2019.

The project will help the US reduce its natural gas imports from the Middle East and Venezuela. It is expected to create approximately 20,000 jobs during the construction and operation phases.

“The Canadian portion of the Keystone XL Pipeline will include a 529km-long pipeline segment.”

The Keystone XL pipeline was proposed by TransCanada in June 2008. The Presidential Permit application for the project was submitted to the US Department of State (DoS) in September 2008.

The project received approval from the National Energy Board (NEB) of Canada in March 2010. The Final Environmental Impact Statement (FEIS) for the project was issued in August 2011.

DoS evaluated the pipeline’s new proposed route and published the final Social and Environmental Impact study report in January 2014. The project failed to receive the Presidential Permit from the US Government and was put on hold.

Keystone XL pipeline aims to supply crude oil from the Western Canadian Sedimentary Basin (WCSB) in Canada and the Bakken Shale Formation in the US to existing Keystone Pipeline in Steele City, Nebraska, and Texas.

The Canadian portion of the Keystone XL Pipeline will include a 529km-long pipeline segment. The pipeline will originate at the Hardisty terminal and continue through Alberta, towards the south, before entering in the Canadian-US border at Monchy in Saskatchewan.

It will enter the US at Morgan on Montana’s border and pass through South Dakota, as well as Nebraska, where it will be connected to the existing Keystone Pipeline at Steele City.

Construction and infrastructure of the Canadian -US pipeline

“The pipeline project will help the US to reduce its natural gas imports from the Middle East and Venezuela.”

Inspection of all welds will be carried out using non-destructive examination equipment. Piping used in the project will be covered with a corrosion-resistant protective coating. The pipeline sections will be pressure-tested with water before operations start. The project will implement environmental protection plans to re-establish the vegetation on the passage once construction is complete.

There will be above-ground facilities to support the pipeline operation. The above ground infrastructure will include 30 pump stations to ensure the free flow of crude oil through the pipeline and 112 mainline valves. The project will also involve construction of an alternative terminal and delivery points. Tank farms covering 74 acres will be constructed at Cushing and Oklahoma delivery points.

Keystone XL will have an initial capacity of 700,000bpd with a further capacity to transport 830,000bpd. The pipeline will increase the total capacity of Keystone Pipeline to 1.3Mbpd.

The pipeline will be continuously monitored using supervisory control and data acquisition (SCADA) and leak detection systems. Pumps and valves will be remotely controlled from a computerised control centre, manned 24 hours a day. The pipeline will be equipped with 21,000 data transmitters for observing the pressure and oil flow.