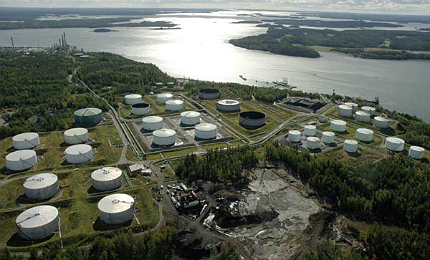 Neste Oil Corporation is a refining and marketing company which has two refineries in Finland, one at Porvoo and the other at Naantali. The two refineries have a combined refining capacity of more than 14 million tonnes per annum.

History of the Naantali refinery

Neste Oil’s refinery at Naantali, Finland, was commissioned in 1957. The refinery has facilities for crude distillation and vacuum distillation, TCC gasoline desulphurisation, a visbreaker, reformer, solvents dearomatisation and bitumen.

With a total of 30 refining units, several products used mainly in agriculture, industry, heating, traffic and transport are produced from the refinery.

Running on heavy sweet Russian crude input, the Naantali refinery can distil three million tonnes per annum (58,000bpd) on average, and can store more than one million cubic metres of crude oil and petroleum products.

In 2007 the refinery began implementing an enterprise asset management system, designed by enterprise applications company IFS as part of a €2m contract.

A new hydrocracking unit was also proposed to be built at the Naantali refinery, and the basic engineering for the expansion project ended in September 2008. However, the expansion plan was concluded to be unfeasible, due to poor global economic conditions in 2008 and the high cost of capital. The refinery employs approximately 350 people.

Maintenance and upgrades at the Finnish refinery

The refinery underwent maintenance and modernisation respectively in September 2007 and April 2012.

During the maintenance upgrade, held in 2007, one of Neste Oil’s suppliers, Metso Corporation, replaced older valves in the refinery. They were fitted with the Neles ND9000 intelligent valve controllers and approximately 40 Neles ValvGuard partial-stroke testing systems of safety valves.

Metso’s device and asset management software, the Neles FieldCare system, was implemented for configuring and condition monitoring of the refinery’s field equipment. About 1,200 devices in the refinery have been connected to FieldCare.

A new refinery-wide automation system named metsoDNA was installed at the Naantali site in 2007. The new system was supplied by Metso and combined the various phases that were controlled as separate units into a single complete process-monitoring and control unit.

The Naantali refinery unit had previously housed the Metso Automation Damatic Classic automation system, installed in the 1980s. The older system could not be expanded further, so had to be replaced by a more modern system.

The new automation project started at Metso Automation in 2005 and was completed in 2007. The new system is expected to have a lifecycle of about 12 years. The automation cost Neste Oil €12m. Approximately 25% of the cost was incurred for 500 different items of new equipment.

As a part of the implementation of the new automation system, new operator interfaces were installed in place of the XD systems. However, the refinery’s distributed control systems (DCS) were not completely replaced.

An oil spill occurred at the refinery on 9 November 2006. The spillage happened when one of the refinery’s thermal catalytic cracking (TCC) units, used in gasoline production, was resumed after a maintenance shutdown.

During the incident between one and two cubic metres of vacuum gas oil were released, out of which about 500l spilled into the sea. After the incident, the company took all necessary precautionary measures against further oil spills.

A similar spillage occurred at the refinery in December 2001, for which the company was fined €500,000 by the Supreme Court of Finland.

The Naantali refinery generates components which, when blended, can produce 140 individual products.

More than ten percent of the output is bitumen, which is principally used in road construction and building products.

The entire consignment of crude oil refined at Naantali is delivered by sea. The Naantali harbour, commissioned in 1946, is Finland’s fifth largest to date and all tankers operating in the Baltic Sea can berth at the harbour.

Overland and sea transportation modes are used to transport the refinery’s end products to customers. About 60% of the products are carried overland, while 40% are carried by sea.

Mooring boats are used to transport products between the harbour and the refinery. In June 2008, Mobimar Ltd delivered a new mooring boat, named ‘AKKA’, for Neste Oil’s activities in the harbour.

The Fortum Oil and Gas Oy (subsequently renamed to Neste Oil Corporation) Porvoo refinery at Kilpilahti, Finland, situated 35km east of Helsinki, undertook an upgrade and expansion of its diesel production facilities in August 2004. The expansion started on a 4.5ha site and required an investment of over €50m over a two-year period.

The Karsto complex, which lies 30km north of Stavanger in Norway, processes rich gas from central parts of the Norwegian Continental Shelf (NCS), including the Asgard and Mikkel fields, and unstabilised condensate from the Sleipner area of the North Sea.