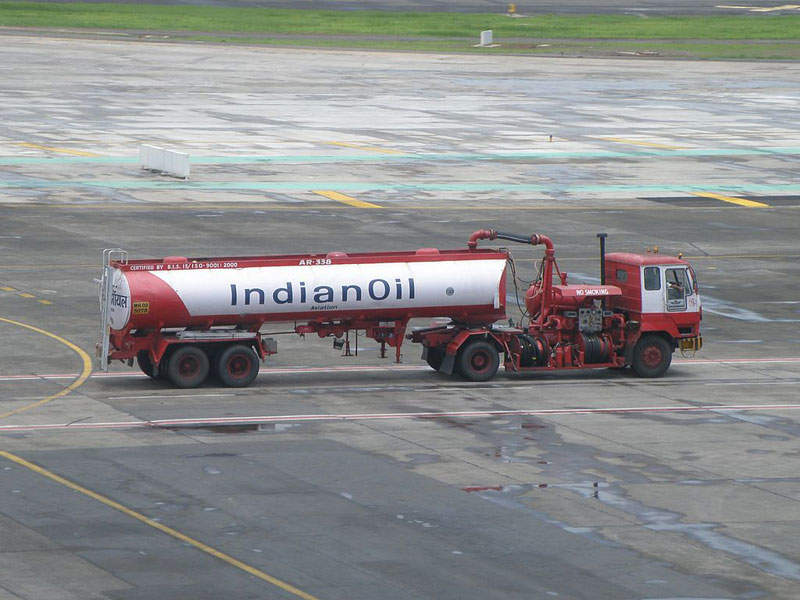 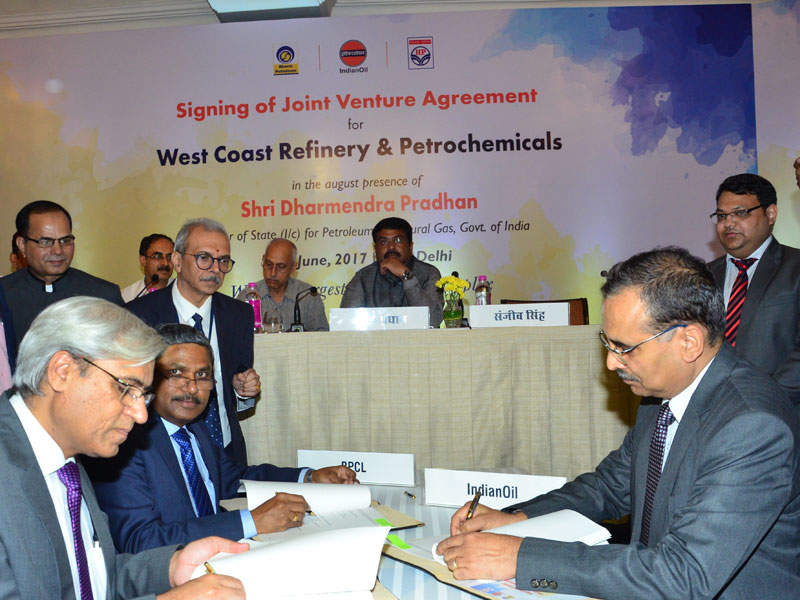 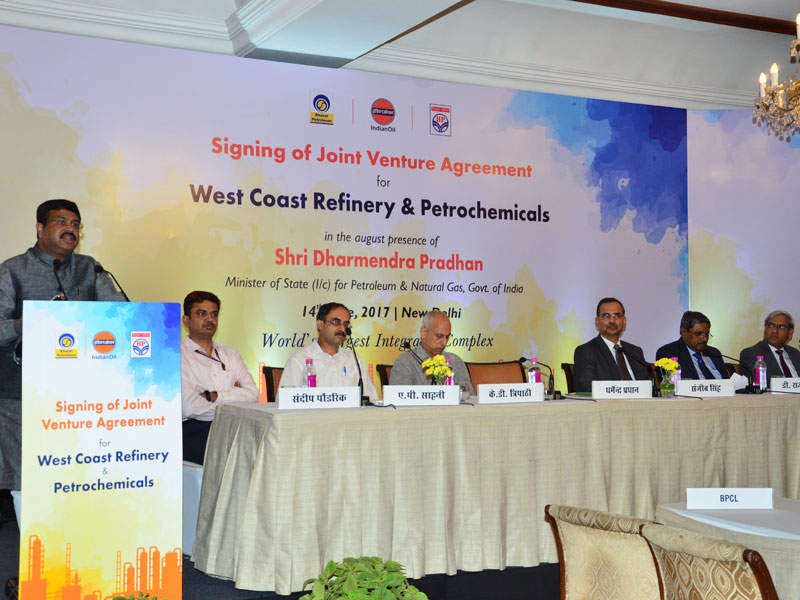 The signing ceremony for the joint venture agreement of the West Coast refinery project was held in June 2017. Credit: Indian Oil Corporation.

IOC holds a 50% stake in RRPCL, while BPCL and HPCL each hold 25%. The $44bn Ratnagiri oil refinery project will have a processing output of 60 million metric tonnes per year (Mtpa) and is expected to be commissioned by 2023.

A memorandum of understanding (MoU) was signed between Saudi Aramco, IOCL, BPCL and HPCL for developing the oil refinery in April 2018.

IOCL, BPCL and HPCL, along with Saudi Aramco and ADNOC will develop the refinery in a 50:50 partnership.

Ratnagiri oil refinery will consist of three main blocks, consisting of the refinery, aromatics, and petrochemicals. It will comprise 50 high-efficiency refining unitsbuilt on 15,000 acres of land. Another 1,000 acres on India’s west coast will be used for development of marine and port facilities of the refinery.

“The $40bn West Coast refinery project will have an output capacity of 60 million metric tonnes per year (Mmtpa) and is expected to be commissioned by 2022.”

The refinery block will consist of three crude oil units with a capacity to process 1.2 million barrels of crude oil per day.

Its primary processing facility will comprise three trains of crude and vacuum distillation units, while the secondary processing area will feature a feed hydrotreating unit and a fluid catalytic cracking/hydrocracker system.

The aromatics block will include a combination of units designed to produce para-xylene, benzene and toluene.

The petrochemical block will include a dual feed cracker, which will use C4 gases and refinery naphtha to produce petrochemical feedstock for downstream polymer units.

The refinery will also see construction of five jetties in Girye bay, Vijaydurg,15km from the site. Jetties will be used for the import of crudes and condensate and export of LPG and condensate.

Derivatives from the petrochemical block such as ethylene, propylene and others will be used to produce a variety of other petroleum substances.

Its C6 stream will be further utilised to extract benzene from the extraction unit, which will also recycle C6 raffinate and fully hydrogenated C5 back to the cracker.

Additionally, the C9 stream and hydrogenated pyrolysis gasoline are expected to be sold for further end-uses.

Infrastructure and other facilities

The refinery complex will house its own utility and offsite facility block, which will include a desalination plant, a power plant, compressed air and nitrogen system, cooling water device and fuel oil/fuel gas system.

A desalination plant for the complex will be built 15km from the refinery. It will consist of three reverse osmosis desalination modules with the capacity to process 180 million litres of water a day and seven pipelines with a diameter of 48in.

Water for the refinery and petrochemical complex will be supplied from Arabian Sea.

Power for the desalination plant and crude oil terminal will be sourced from the Maharashtra state grid.

An offsite storage facility unit for storing crude oil, as well as intermediate and finished products will also be developed as part of the project.

Engineers India carried out the preliminary configuration study for the project, while the market study for the chemical and petrochemical products was conducted by IHS.