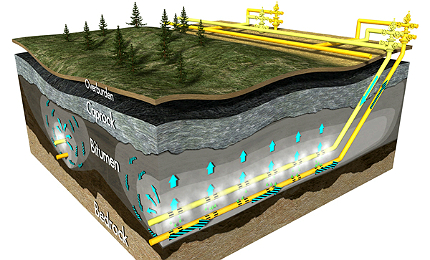 The onshore oil sands project is being jointly developed by Husky Energy and BP, through a 50-50 partnership. Husky Energy operates the field. The two partners invested $2.5bn in the first phase of the project development.

The two companies entered into an agreement in 2008 to establish a partnership with equal ownership for the production, refining and marketing of the Sunrise oil sands project. Under the agreement, Husky transferred 50% of its fully owned Sunrise project in exchange for 50% ownership in the BP-operated refinery near Toledo in Ohio.

First oil from the deposit was achieved in March 2015.

Approval to develop the bitumen deposit

The environmental impact assessment (EIA) and conceptual study for the development of the Sunrise field were started ten years ago, in 2002. In February 2004, the Energy Resources Conservation Board (ERCB, formerly Alberta Energy and Utilities Board) and Environment and Sustainable Resource Development (ESRD, formerly Alberta Environment) received a public disclosure document from Husky.

Commercial application to build and operate the 200,000 barrels a day (bbl/d) oil sands project was submitted to the two provincial authorities in August 2004. ERCB approved the project in December 2005, while ESRD gave its nod in October 2006. An amended version of the project was approved in January 2009.

"Husky transferred 50% of its fully-owned Sunrise project for 50% ownership in the BP-operated refinery near Toledo in Ohio."

Front end engineering and design (FEED) for the first phase was completed in January 2010. Detailed engineering, procurement and construction (EPC) was launched in November 2010.

As of November 2012, construction on phase one was 50% complete. Phase two is in the engineering stage.

The produced bitumen is transported to BP-operated Toledo refinery through existing pipelines.

Bitumen from the Sunrise oil sands is produced by employing an enhanced oil recovery technology known as steam assisted gravity drainage (SAGD). The technology keeps the surface land disturbance to a minimal level and does not require large tailings ponds or open pit mining.

Steam is continuously injected into the upper well to heat the reservoir bitumen and reduce its viscosity. This causes the heated oil to flow into the producer well (lower horizontal well), where it is pumped out.

"The produced bitumen is transported to BP-operated Toledo refinery through existing pipelines."

In December 2010, Saipem was given a $1bn engineering, procurement and construction (EPC) contract for the Sunrise CPF.
Apart from production and storage of extracted bitumen, the scope of the contact includes oil treatment, removal of oil from produced water, water treatment and steam generation.

Worley Parsons serves as an EPC contractor for the field facilities. Midstream pipeline and terminal services were provided by Enbridge as part of a $475m contract announced in September 2010. Atco Structures & Logistics was contracted in May 2011 to provide site services for the project.

The Horizon Oil Sands Project is being developed by Canadian Natural Resources Ltd.

Project Voyageur is the centrepiece of the Suncor growth strategy. This is a multiphase plan to increase its oil sands production to more than 550,000 barrels a day by 2016, a 120% rise on 2004’s production.

In December 1999, Shell Canada Ltd, the country’s number three integrated oil company, announced the upgrading of its Scotford crude oil refinery facility as well as the construction of a new upgrader next to it.