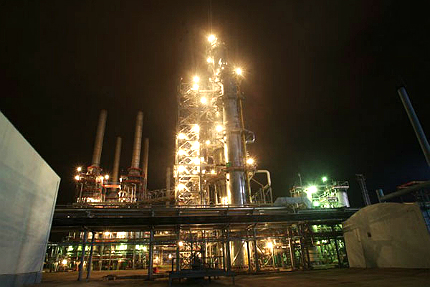 Tuapse, operational since 1929, is the oldest refinery of Russia’s largest crude producer Rosneft. The refinery specialises in motor fuel production and processes crude oil from Western Siberia, as well as southern Russia.

The expansion and upgrade project at the refinery is being carried out as part of Rosneft’s broader Refinery Modernisation Program initiated in 2008.

The project aims at increasing refinery efficiency and capacity, while meeting the quality requirements of engine fuels as per the Russian Government-approved new technical regulations.

The first phase, which included the construction of a new crude distillation unit CDU-12, was completed and officially launched for operations in October 2013. The entire upgrade is scheduled for completion in 2014.

"The refinery specialises in motor fuel production and processes crude oil from Western Siberia, as well as southern Russia."

A new refinery with a 90% light product yield and Nelson Complexity Index rating of about 8.0 is being constructed near the existing plant, as part of the expansion.

Other infrastructure, including new gas facilities and oil storage facilities, are being constructed as part of the refinery’s reconstruction.

The project also includes thorough development of engineering design for the main process plant at Tuapse refinery. The upgrade will allow the refinery to produce automotive fuel of Euro-4 and Euro-5 standards.

Process control and management systems complying with present day safety and environmental standards are being implemented at the refinery. The mechanisms to adjust volume and quality of petroleum production are also being incorporated.

The Tuapse refinery expansion and upgrade project is being constructed in three phases. Phase one included the construction of an atmospheric-vacuum crude distillation unit (CDU) for primary refining with part of it meant for hydrotreatment of naphtha.

A vacuum gas oil hydrocracking unit with diesel hydrotreatment, a hydrogen unit, a naphtha isomerisation and hydrotreatment unit, a catalytic reformer, a sulphur production unit and a flexicoker are being constructed in the second phase of the project.

The third stage will include the construction of a Flexicoking unit designed for deeper conversion of oil residues. The unit will maximise the refining depth rate of the refinery.

The refinery is located in close proximity to the Tuapse oil loading terminal owned by Rosneft. Around 90% of the refinery’s petroleum products are exported from the terminal, while ten percent are sold domestically.

Izhorskiye Zavody, part of the OMZ Group, was awarded a contract in 2010 to supply six hydrocracking reactors for the Tuapse refinery expansion. All reactors were supplied to the refinery by November 2012. The shipment of the reactors was contracted to the North-Western Shipping Company together with Infotech-Baltika.

"The upgrade will allow the refinery to produce automotive fuel of Euro-4 and Euro-5 standards."

The reactors, designed for deep processing of oil and high-quality Euro-5 fuel production, were produced under a license from Chevron Lummus Global (US).

Two of the hydrocracking reactor vessels have unique dimensions with height of 40m, diameter of five metres and weight of 1,400t each.

Baltic Pipeline System-2 (BPS-2) is a Russian oil supply system built and operated by Transneft, a government-owned company responsible for oil pipelines in the country.