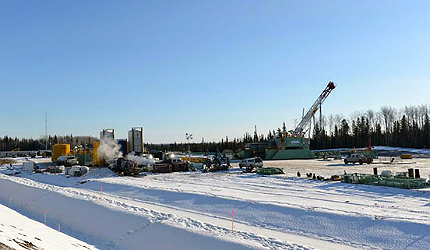 The project was approved by the Energy Resources Conservation Board (ERCB) in January 2012. Civil construction on the central processing facility of the project was advanced to 40%, while general engineering for surface facilities was 75% complete by October 2012.

Steam injection started in mid-2013 and first oil was produced in December 2015.

Geology and OBIP at West Ells

"The project covers an area of 3,870 acres and is located 60km west of Fort McKay in north-eastern Alberta, Canada."

The West Ells lease area is made up of sediments belonging to Quaternary, Tertiary and Cretaceous geological periods.

Major unconformity surfaces buried at the base of these sediments are characterised by long periods of non-deposition and erosion.

The continuous net pay thickness of oil sands in the site’s reservoir ranges from between 13.5m and 18m.

Original bitumen in place (OBIP) as per an internal resource evaluation is estimated to be 377.8 million barrels. The SAGD process is expected to recover around 55% of the OBIP. The project is designed for a maximum production capacity of 10,000bpd and is expected to remain operational for a period of 25 years.

The West Ells SAGD project involves the drilling of approximately 80 well pairs from nine individual well pads. The first two phases, each of 5,000bpd capacity, have already been sanctioned for construction and operation. Construction on the first phase began in the first half of 2012.

Up to 13 well pairs were drilled from two well pads in phase one. The planned facilities also include associated infrastructure, such as an all-weather access road, power line, pipeline and a central processing facility (CPF).

Bitumen recovered from the SAGD well pairs is sent to the CPF through infield pipelines. The processed bitumen is then be trucked to market.

The second phase will increase the production rate by 5,000bpd. Up to 18 well pairs from two additional well pads are scheduled to be drilled in this phase. The total number of well pairs, however, will depend on the performance of wells drilled during the first phase.

The West Ells CPF is being built on a 29.3ha site located west of the Fourth Meridian. The processing facility will have two trains.

The first train will serve the first phase, while the second train will be brought on-stream during the second phase of construction.

The main components of the processing facility include bitumen, water and gas separation, water de-oiling, water recycling and treatment, steam generation and a pipeline transportation system. Additional systems that will be incorporated into the facility include flue gas, flare and drain heating and cooling and power distribution.

The product processed by the CPF will be of sales-quality diluted bitumen with purity levels of more than 99.5%.

The associated gas in the reservoir fluid is first separated and then recovered as a fuel for use in the SAGD process. The resultant fluid is then mixed with a diluent to make it less viscous. This process makes the separation of oil from the water easier.

The oil that does not meet the specified level of purities is either treated as a waste product or gradually mixed with the oil that meets the purity specifications.

In December 1999, Shell Canada Ltd, the country’s number three integrated oil company, announced the upgrading of its Scotford crude oil refinery facility as well as the construction of a new upgrader next to it.