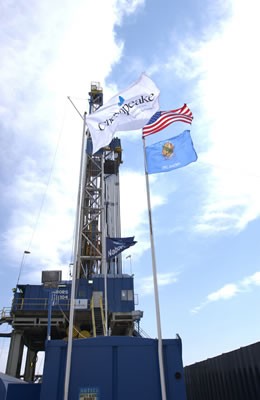 Chesapeake Energy has signed multiple agreements to sell all of its midstream assets and certain noncore leaseholds located in the US Permian basin, for a total consideration of $6.9bn.

Part of the net proceeds from the sale will be used to fully repay the company’s $4bn term loans.

The assets being sold produced approximately 21,000 barrels of liquids and 90 million cubic feet of natural gas per day during the second quarter of 2012.

Subject to standard contingencies and approvals, the sale is expected to close in 30 days and the company will receive 87% of the proceeds in cash.

The company will however retain approximately 470,000 net acres of undeveloped leasehold in the Midland Basin.

Chesapeake’s midstream assets will be sold for $3bn. Three sale agreements have been signed while a fourth will be signed soon.

A letter of intent has been signed between Chesapeake subsidiary Chesapeake Midstream Development and Global Infrastructure Partners for the sale of the midstream assets for $2.7bn.

Assets to be sold include gathering and processing systems in the Eagle Ford, Utica, Haynesville and Powder River Basin Niobrara shale plays.

The transaction also includes new market-based gathering and processing agreements, as well as one new volume commitment covering approximately 70% of the company’s expected production volumes in the southern portion of its Haynesville Shale during 2013-17.

Certain mid-continent midstream assets as well as certain oil gathering assets in the Eagle Ford Shale will be sold for combined proceeds of approximately $300m.

The transactions for midstream assets will close in the third and fourth quarters of 2012.

Chesapeake’s total proceeds from its midstream exit, including previous sale of its limited and general partnership interests in Access Midstream Partners in June 2012, will be $5bn.

Noncore leasehold assets in the Utica Shale and various other areas have also been sold for approximately $600m.

Post-sale, the company will own approximately 1.3 million net acres of leasehold in the Utica Shale.