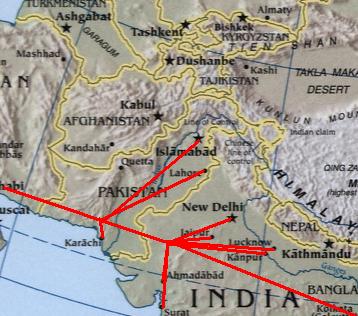 Iran and Pakistan have officially inaugurated the construction phase of a gas pipeline project which will bring Iran’s gas reserves to Pakistan.

The project, which was conceived during the early 1990’s, aims to deliver 750 million cubic feet of gas per day from Iran’s South Pars field to the Pakistan-Iran border, by a 56in 1,150km pipeline. It is expected to be completed in 2015.

A 900km pipeline from South Pars to Sheher in Iran has already been completed, while the design of construction of a 200km pipeline, which will run up to Gabd-Zero point, is in the final stages.

The 781km Pakistani section of the pipeline will be laid close to the Makran coastal highway from Gabd-zero point to Nawabshah in Sindh.

Once completed, the pipeline will help generate 4,000MW of electricity.

Germany’s Beratende Ingenieure and Pakistan’s Nespak will act as consultants for the 781km pipeline project, while construction work will be carried out by Tadbir Energy of Iran, at an estimated cost of $1.3bn.

Iran will contribute $500m to the pipeline project, while the remaining cost will be adjusted by a Chinese loan and gas infrastructure development cess.

Both the countries signed intergovernmental framework and gas sale and purchase agreements in 2009, which legally came into force on 13 June 2010.

Iran President Mahmoud Ahmadinejad said the gas pipeline is a peace pipeline and the world has to abstain from creating obstacles to maintain peace.

"This pipeline will become a milestone in regional cooperation and this event is a message to opponents," Ahmadinejad added.