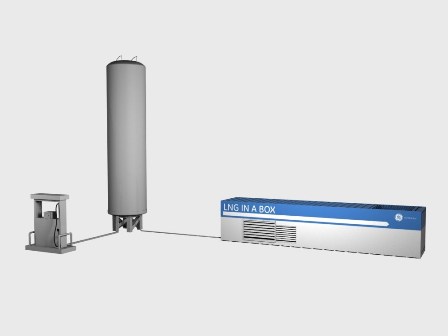 US-based GE Oil & Gas has introduced a small-scale, plug-and-play, re-deployable liquefied natural gas solution called LNG In a Box, which will allow the use of natural gas as a cost-effective and cleaner transportation fuel.

Luxembourg-based Gasfin, through its operating company AIR-LNG, will deliver the first LNG In a Box system for LNG fuelling stations in Europe.

Gasfin has signed a memorandum of understanding with GE to install five LNG In a Box units, which will serve as clusters for LNG fuelling stations.

The first unit will be installed near the border of Italy and Slovenia.

Each LNG In a Box unit is fitted with a gas pre-treatment system, cold box assembly and boil off gas compressor, turboexpander compressor, high-speed reciprocating compressor, electric motor and driver and control system.

The new system can be used in different industry sectors, which include highway transportation, marine, rail, as well as in remote industries, such as mining and distributed power generation.

The LNG In a Box system can cover an LNG production range of 10,000-50,000 gallons a day, which is equal to 16t-18t per day and requires low CapEx and OpEx commitment.

Small-scale solutions such as the LNG In a Box system are expected to promote the transition of long-haul trucks from diesel fuel to LNG.

In North America, fuel savings may result in a three-year payback based on current fuel prices, while the trend can displace about 1.7 million barrels a day of oil and reduce total well to wheels GHG emissions by 7%-15%.

GE has also introduced products such as CNG In a Box system and the Micro LNG plant.

Image: Illustration of LNG In A Box, with fuel tank and pump. Photo: Courtesy of GE.