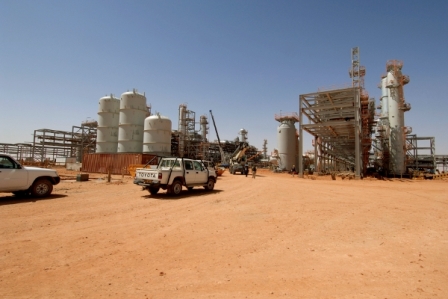 Islamist militants attacked the In Amenas gas field in Algeria yesterday, killing one Briton and an Algerian, and holding at least twenty western contractors hostage.

A standoff between the militants and Algerian troops ensued last night at the Statoil, BP and Sonatrach joint venture gas facility. The attack is believed to be in response to France’s military intervention in nearby Mali.

Algerian Interior Minister Daho Ould Kabila was quoted by the BBC as saying that troops had surrounded the living quarters at the facility in Amenas, where citizens from Norway, France, Britain, America and Japan are being held.

Kabila said in a press conference that the terrorist group, carrying heavy arms in three vehicles, had attacked a bus carrying workers from the gas facility.

Soon after the attack, an al-Qaeda affiliate took responsibility for the raid claiming it is part of a pledge to retaliate against Algeria’s decision to allow France to use its air space to attack Islamists in Mali.

In a statement confirming the incident, BP said, "The site was attacked and occupied by a group of unidentified armed people at about 0500 UK time. Contact with the site is extremely difficult, but we understand that armed individuals are still occupying the In Amenas operations site."

"Our absolute priority is the safety and security of our staff," BP added.

The company has activated its emergency response system and is trying to contact relatives of its employees on the site.

UK Foreign Secretary William Hague in a statement said that "a number of British nationals" are among the hostages.

Norwegian Prime Minister Jens Stoltenberg also stated that around 13 Norwegian employees of Statoil are believed to have been taken as hostage at the gas facility.

US state department spokeswoman Victoria Nuland also confirmed that US citizens were among the hostages, while Irish Foreign Minister Eamon Gilmore said that one of its nationals has also been taken hostage.

Anonymous government officials were quoted by Japanese news agencies as saying that there were three Japanese hostages.

On 23 June 2006, BP announced commencement of production at the gas project, which included the development of four primary gas fields along with gas gathering and processing facilities.