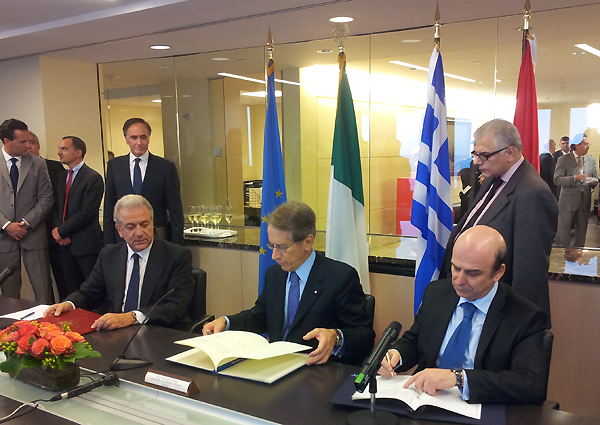 Switzerland-based Trans Adriatic Pipeline (TAP) announced the signing of a memorandum of understanding (MoU) by the governments of Italy, Greece and Albania confirming their political support for the TAP project.

The project will involve an 800km TAP pipeline taking natural gas from the giant Shah Deniz II development in Azerbaijan though Greece and Albania, across the Adriatic Sea to southern Italy for further transport into Western Europe.

The pipeline is designed to expand the transportation capacity from 10bcm to 20bcm per year.

The MoU was signed in the presence of representatives from the US Government during a United Nations General Assembly meeting in New York, US.

The agreement offers the necessary approval for continued commercial activities in Italy, with the company also needing to secure regulatory approvals for the project.

TAP managing director Kjetil Tungland said the company would like to thank the Italian, Greek and Albanian governments for their political support for the project.

"This is another great step forward for the project and is testament to TAP’s commercial and technical strengths and the significant benefits that it will bring to these countries," said Tungland.

"Today’s signing follows a number of major milestones that TAP has achieved this year, including being the first pipeline to be selected by the Shah Deniz Consortium in February, a Cooperation Agreement with the Consortium in June and the Funding Agreement with BP, SOCAR and Total that was signed in August.

"We are working to further progress the project in the coming months."

The project is expected to open up the Southern Gas Corridor, thereby enhancing Europe’s energy security by contributing to the diversification of the region’s gas supplies.

The project may have physical reverse flow of up to 80 % and the company also has an option to develop natural gas storage facilities in Albania to further ensure security of supply.

Switzerland-based EGL has a 42.5% stake in the TAP project, while Norway’s Statoil has a 42.5% interest and Germany-based E.ON Ruhrgas owns 15%.