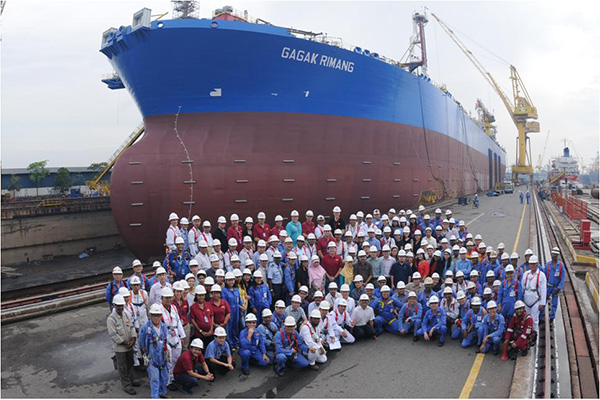 The Banyu Urip oilfield located within the Cepu Block in Bojonegoro, East Java, Indonesia, is estimated to hold more than 450 million barrels of oil within the Oligo-Miocene carbonate and Middle-Miocene clastic reservoirs.

The field was discovered in April 2001 and was appraised by drilling six wells. The project development plan was approved by the Minister of Energy and Mineral Resources in July 2006.

Initial production of limited quantities started in the field in December 2008 and the early production facility (EPF), with a production capacity of 20,000 barrels per day (bpd), was commissioned in August 2009.

Construction activities for the Banyu Urip Full Field Development started in December 2011. The project was 90% complete by August 2014, and peak production of 165,000bpd from the field was achieved in 2016. The oilfield is estimated to account for around 20% of Indonesia‘s overall oil production.

The overall investment in the project has reached $ 2.52bn, $2.18bn of which has been spent for the construction of production facilities, and $337m for well drilling activities.

Duri oil field is approximately 18km long and 18km wide. It is located in the Riau Province, in the South Sumatra Basin on the eastern coast of Sumatra, Indonesia.

A 30-year production sharing contract for the Cepu Block was signed in September 2005, between Exxon Mobil, PT Pertamina (Persero) and the Indonesian Government. Mobil Cepu (MCL), a subsidiary of Exxon Mobil, operates the field while also holding a 45% interest.

The oilfield is being developed under five separate engineering, procurement and construction (EPC) contracts. The treated oil will be transported through a pipeline to the coast at Tuban and further through a subsea pipeline to a floating storage and offloading (FSO) vessel, where tankers will transport the oil to domestic and international markets.

EPC 1 involved the installation of the central processing facility (CPF) including three wellpads for the drilling of 45 wells and a flowline from the wellpads to the CPF. The CPF for Banyu Urip field came on stream in December 2015.

It further involves the installation of a sour crude processing and stabilisation system with a capacity of 185,000bpd, crude storage facility with a 125,000bpd storage capacity, an export pump, gas handling and injection systems, a produced water treatment facility, a fuel gas treatment plant and a power generation plant.

EPC 2 entails the installation of an onshore insulated pipeline, measuring 72km-long and 20in-diameter, from the CPF to the Tuban shoreline.

EPC 3 primarily involves the installation of a 2,600t mooring tower at a water depth of 33m and laying of a 23km-long and 20in-diameter offshore export pipeline integrating polyurethane foam insulation from the Tuban shoreline to the mooring tower.

EPC 4 involved in the conversion of the MT Chios very large crude carrier (VLCC) into a floating storage and offloading (FSO) vessel.

Gagak Rimang has a minimum storage capacity of 1.7 million barrels, offloading rate of 30,000 to 50,000 barrels an hour, with a capacity to accommodate a tanker with a deadweight measuring between 50,000dwt and 300,000dwt. The FSO can accommodate between 60 and 70 crew members.

"Natural gas produced along with the crude oil is used for power generation at the CPF."

Water injection wells increase the production from the field by maintaining pressure in the reservoir and convey the oil to the producing wells. The required injection water is sourced from the Bengawan Solo River. Natural gas produced along with the crude oil is used for power generation at the CPF.

The main contractor for the EPF was Exterran. Technical support services were provided by Kentz and the foundation works for the facilities were carried out by Excel Engineering.

The towage of the FSO from the shipyard to the offshore site was performed by Posh Terasea. Two dehumidifier containers for the FSO were designed and supplied by Compass Energy. Approximately 450 national and local sub-contractors are involved in the project.

The contract to design and procure a tower yoke mooring system for the project was awarded to Sofec.