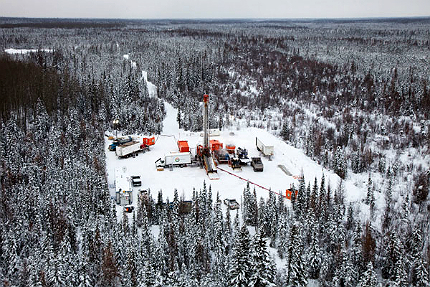 The project was implemented with a $536m investment and an additional $27m for the construction of ancillary infrastructure.

SAGD technology at the Hangingstone project

The SAGD process is implemented for production as Athabasca does not do surface mining.

The innovative SAGD process is an advanced form of steam stimulation in which a pair of horizontal wells measuring approximately 800m is drilled into the oil reservoir. The vertical distance between the two horizontal wells is about five metres, and each well pair is spaced at 100m.

Steam is injected into the upper well on a continuous basis to heat the oil and reduce its viscosity. The heated oil then drains into the lower well and flows to the surface, along with the warm water. The water required to generate the steam for SAGD operations is sourced from local subsurface aquifers.

The front-end engineering and design (FEED) study for the current SAGD project in Alberta was completed in early 2012. The project is being implemented in three phases. The regulatory approval for the first phase was obtained in October 2012 and the budget was sanctioned in November 2012.

"The water required to generate the steam for SAGD operations is sourced from local subsurface aquifers."

The drilling of the well pairs commenced in August 2013. Initial injection of steam for the first phase was completed in 2014. The first production of bitumen was achieved in July 2015.

The regulatory application for the next two phases was submitted in May 2013. The two subsequent phases are expected to be developed at 40,000 and 30,000 barrels a day capacities respectively.

Bitumen from the field is conveyed via a pipeline to Enbridge’s Cheecham Terminal. The pipeline measures 45km in length and 16 inches in diameter. The current project is the ninth oil sands project to be connected to Enbridge’s regional system.

GE has been contracted to provide its evaporation technology for the project. GE’s water treatment system is designed to recover 98% of the produced water and brackish water used as boiler feedwater to drive the SAGD process.

The Fort Hills project is an integrated oil sands project that includes a mine (approved in 2002 by Alberta Environment and the Alberta Energy and Utilities Board) and bitumen extraction facility, situated 90 miles north of Fort McMurray in Alberta (Athabasca oil sands region), Canada.