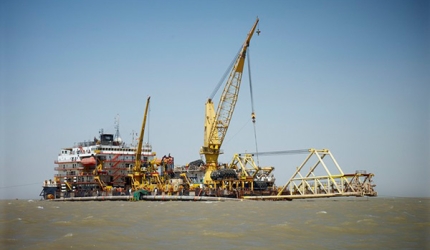 Iraq Crude Oil Export Expansion Project (ICOEEP) is a 247km-long pipeline master planned by the Iraqi Ministry of Oil (MoO). The new pipeline will increase the country’s Basra crude oil export capacity. It will be located in the Persian Gulf of Iraq.

The ICOEEP was conceptualised in 2007 when the Iraqi Ministry of Oil decided to increase Iraq’s export capacity of the existing offshore facilities from 1.8 million metric barrels per day (MMBPD) to 4.5MMBPD within five years.

Construction of the first phase of the project began in February 2011. It was completed and the first oil cargo was loaded onto the tanker Maersk Hirado in April 2012.

The offshore works will be carried out in the third and fourth quarters of 2013. Two single-point mooring systems (SPMs) will be installed by the end of 2012.

The project is being developed in three phases. The $733m first phase included installation and commissioning of two 48in diameter pipelines (around 8km onshore and 43km offshore), an onshore facility at Fao terminal, 120km offshore terminal, SCADA systems and two SPMs. Two more SPMs are also installed but will start functioning once phase two is built. The crude tankers will be connected to the SPM buoys for offtaking the oil.

"The ICOEEP was conceptualised in 2007 when the Iraqi Ministry of Oil decided to increase Iraq’s export capacity of the existing offshore facilities from 1.8 MMBPD to 4.5MMBPD within five years."

The $500m phase two will include fabrication and installation of a central metering and manifold platform (CMMP), located near the existing pipelines of the Al Başrah Oil Terminal (ABOT).

Japan International Cooperation Agency (JICA) has financed $518m for the phase three offshore infrastructure expansion. Phase three will be known as the JICA Sealine Project. It will include installation of a third 48in diameter pipeline, a valve station near to the existing ABOT pipeline, and another SPM.

Construction and infrastructure of the pipeline expansion

The first phase expansion will increase the production capacity of crude oil by around 1.8MMBPD. The second phase will expand the capacity by another 1.8MMBPD.

Connection of the single-point mooring systems

The two SPMs constructed in phase one are connected to the pipelines and are now operational. The onshore facility at Al Fao will supply oil through the new pipelines connected to the CMMP. The oil will thereafter be distributed to the four SPMs. The operation of SPMs will take place in the CMMP system which can load around 900,000bpd.

The Abu Dhabi crude oil pipeline project, also known as the Habshan-Fujairah pipeline, was initiated by the International Petroleum Investment Company (IPIC), which is owned by the Abu Dhabi Government.

Foster Wheeler was awarded the project management consultancy contract for the ICOEEP by South Oil Company (SOC), a company owned by Iraq’s Ministry of Oil. In early 2009, SOC had awarded a front-end engineering and design contract to Foster Wheeler.

Leighton Offshore Oil & Gas was awarded the construction contract for the first and third phases of the project. The company had collaborated with K2 Technology to supply the resources for building the computerised maintenance management system for phase one.

BEKK Solutions supported Leighton Offshore for the subsea installation works under the first phase of the project. Van Oord is the dredging contractor.

Saipem was awarded the phase two engineering, procurement, installation and construction contract worth $1.5bn in October 2011.

Petrofac was awarded a $100m contract in August 2012 to provide offshore operations and maintenance services for the project for a 12-month period.