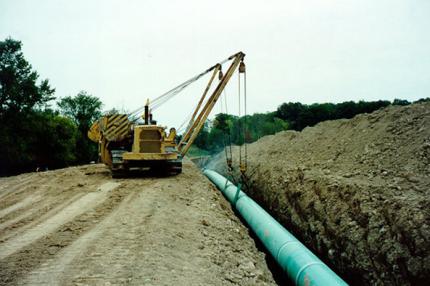 The NEXUS gas transmission pipeline is a proposed greenfield, interstate pipeline, which will extend from receipt points in eastern Ohio to interconnect with the existing pipeline grid in south-eastern Michigan. It will position Ohio and Michigan states as Midwest hubs of natural gas.

The project is being developed by a joint venture of DTE Energy and Spectra Energy, with an estimated total investment of $2bn. Construction is expected to begin in the first quarter of 2017 with completion targeted for the fourth quarter of the same year.

The new transmission pipeline intends to meet the growing demands for natural gas in the upper US Midwest and Ontario in Canada and supply natural gas to local distribution companies, power generators, and industrial users. It is also intended to extend the access to Marcellus and Utica shale gas by providing secure and cost effective supplies of natural gas.

The pre-filing process for the project was initiated with the Federal Energy Regulatory Commission (FERC) in 2014. The FERC is currently conducting a review of the environmental impact of the proposed project.

"More delivery points across the route may be added depending upon the demand."

The new pipeline will take advantage of the existing corridors and infrastructure for most part to minimise the environment and local impacts.

It will extend from Kensington in Ohio to Willow Run in Michigan, covering 11 counties in Ohio, which include Columbiana, Stark, Summit, Wayne, Medina, Lorain, Erie, Sandusky, Wood, Lucas and Fulton. It will run through Lenawee, Monroe and Washtenaw counties in Michigan.

The route will include receipt point interconnects with the Kensington Processing Plant, Texas Eastern Transmission, and Tennessee Gas Pipeline Company in the Appalachian Basin.

It will have delivery point interconnects with DTE Gas Company and Consumers Energy in Michigan, Enbridge Tecumseh storage facility, and the Union Gas Limited Dawn Hub. More delivery points across the route may be added depending upon the demand.

The NEXUS pipeline will use the existing and expansion capacity of the Texas Eastern system, the DTE Gas system and the Vector Pipeline system to enter markets in Ohio, Michigan, Chicago and the Dawn Hub.

The NEXUS gas transmission project will involve the construction of a pipeline with a diameter between 36" and 42" and transmission capacity of 1.5 billion cubic feet a day (Bcf/d). Major part of the pipeline will lie in Ohio as the project serves the Utica and Marcellus Shale production regions.

Additionally, ancillary components such as launchers, receivers and mainline valves will be fitted at different locations along the route.

"The scope of work includes engineering, procurement, construction and project management services for the pipeline."

Fluor Corporation was awarded a contract by DTE Energy and Spectra Energy in February 2015 for the NEXUS gas transmission pipeline. The scope of work includes engineering, procurement, construction and project management services for the pipeline.

Fluor will also be responsible for designing and constructing the compressor stations, and the metering and regulation stations for providing flow control and gas quality monitoring services.