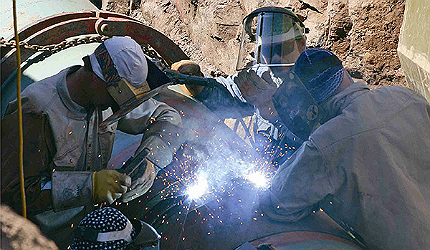 The New Jersey-New York (NJ-NY) expansion project in the US is a proposed extension of the existing Texas Eastern Transmission and Algonquin Gas Transmission pipeline systems.

"The expansion complements the natural gas supplies to the New Jersey and New York regions."

The expansion complements the natural gas supplies to the New Jersey and New York regions. The $1.2bn pipeline was completed in November 2013.

The project provides the vital pipeline infrastructure required for the transportation of natural gas from various upstream receipt points, in order to meet the high demands of the New York and New Jersey metropolitan areas.

The expansion has the capacity to transfer 800 million cubic feet of natural gas each day. The pipeline is fully subscribed by Chesapeake Energy Marketing, Consolidated Edison and Statoil Natural Gas.

In December 2014, the project was named 2014 Premier Construction Project during the Platts Global Energy Awards ceremony held in the City of New York.

Spectra Energy filed an application with the US Federal Energy Regulatory Commission (FERC) for the NJ-NY expansion project in December 2010.

The new pipeline extends through the regions of Bayonne, Jersey City and offshore Hoboken in New Jersey, as well as parts of Staten Island and Manhattan in New York.

Approximately 63.5% of the planned route is located along the Texas Eastern’s existing pipeline and / or existing roadway, railway or other utility passages.

The route avoided residential properties to minimise the effects on landowners, local communities and the environment.

The project lies about 16 miles of new 30in-diameter pipeline from Texas Eastern’s existing metering and regulating (MR) station in the borough of Staten Island to the borough of Manhattan, both in New York. Roughly 108 acres of land are allocated for the operation of the facilities.

"The new pipeline extends through the regions of Bayonne, Jersey City and offshore Hoboken in New Jersey."

The 2.2-mile long, 12in-diameter pipeline segments at Linden and the borough of Staten Island were abandoned as part of the expansion.

The pipeline was constructed using high-strength carbon steel, produced in compliance with the US Department of Transportation pipeline standards. The entire pipeline is covered with a corrosion-resistant coating to waterproof the pipe.

The pipeline was laid according to the highest industry and government standards. State-of-the-art technologies were implemented to minimise the disruption to landowners during the construction. Most of the pipeline segments were installed using horizontal-directional drilling (HDD) technology to reduce impacts.

The multiple construction crews employed in the process, installed the pipeline and restored the area to its earlier state as efficiently as possible.