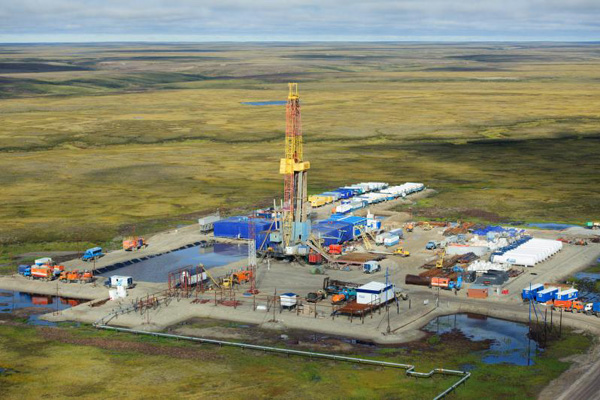 The Novoport (Novoportovskoe) oil-gas-condensate field located in Russia is one of the biggest green-field projects in the Yamal region and is located approximately 250km from the city of Nadym.

Gazprom Neft started drilling activity at the first production well on well pad No.2 in August 2012 and completed the same in 2014. The first shipment of oil, containing more than 10,000t, from the field was made through the Gulf of Ob in May 2013. Full-scale drilling programme is proposed to be undertaken in 2014 and commercial production is expected to begin in 2015.

Gazprom Neft applied hydraulic fracturing method at Novoport for the very first time on Yamal Peninsula in May 2013. The central oil gathering and processing facility at Novoport will have a processing capacity of 5.5Mtpa.

Discovery and details of Novoport field

The Novoport field is a part of Yamal oil-gas condensate fields and is located to the south-east of the Peninsula in YaNAD. The field is hosted by the Jurassic and the Neocomian deposits. The Jurassic deposits are proposed to be developed using controlled directional wells and horizontal wells. The Neocomian deposits will be developed using horizontal wells.

The field has the potential to export year-round offshore oil using the atomic icebreaker Vaigach. A test voyage was conducted from the port of Sabetta to the field, which is located approximately 400km south of Cape Kamenny.

As of January 2014, the Novoport field is estimated to contain reserves of 454 million tonnes of oil equivalent (toe).

Transportation of oil and gas from the Novoport field

Oil produced from the Novoport field will be conveyed to the loading terminal on Cape Kamenny through the 106km-long Novoportovskoye field-Mys-Kamenny pressure oil pipeline. It will then be transported to Murmansk by Ice-7 class tankers.

The Arctic loading terminal (ALT) is expected to be commissioned by November 2015 and will provide for the continuous shipment of oil. The terminal will comprise of a 3km-long onshore oil pipeline, a 7.9km offshore pipeline, a delivery and acceptance station, a tanker loading unit and a loading tower with mooring system.

During the initial stages of development, gas produced at Novoport will be re-injected into the reservoir. Proposals are being made to construct a gas pipeline for transporting the produced gas to Gazprom’s gas transportation system.

Major works at Novoport include the construction of a central oil processing facility (CPF), oil loading terminal and a pipeline from well No.146 to the CPF, a gas engine power plant, in-field flow line, and a high voltage power line. The project also includes the establishment of an oil depot at Cape Kamenny.

"The project also includes the establishment of an oil depot at Cape Kamenny."

The engineering, procurement and construction (EPC) contract for the Arctic continuous shipment oil terminal at the Novoportovskoye field was awarded to Stroytransgaz.