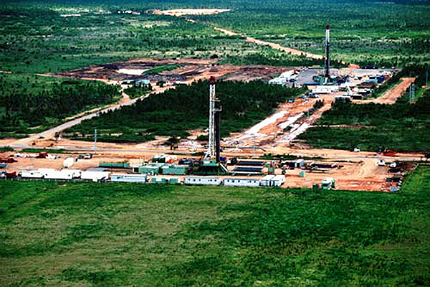 Oil reserves in Venezuela are mainly concentrated in the Maracaibo Basin, a sedimentary basin in the north-western part of the country possessing more than 40 billion barrels of oil reserves, and the Orinoco Belt in central Venezuela which is estimated to contain 235 billion barrels of extra heavy crude oil.

Venezuelan state-owned oil and natural gas company Petróleos de Venezuela (PDVSA) is in charge of the exploration and production of oil resources in the country. Zumaque I in the Maracaibo Basin was Venezuela’s first commercial oil well drilled in 1914. The Maracaibo Basin currently contributes more than 45% of the country’s oil production, while the BolivarCoastal Field, commissioned in 1922, is the largest producing oil field in the country.

PDVSA divided the Orinoco Belt into four exploration and production areas namely Boyaca, Junin, Ayacucho and Carabobo under the Magna Project launched in 2005. The belt has been further divided into 28 blocks, which are being developed in partnership with foreign oil companies. Petroanzoategui, Petromonagas, Petrocedeno, Petropiar, Junin 2 and Junin 4 were active projects in the Orinoco Belt as of 2013.

More than half of the country’s oil reserves are contained in eight giant fields, including the onshore fields Ghawar, Khurais, Shaybah, Qatif and Khursaniyah, plus the offshore fields Safaniya, Manifa and Zuluf. Ghawar oil field, with a production capacity of five million barrels a day and an estimated remaining reserve of 70 billion barrels, is considered to be the largest oil field in the world.

State-owned oil company Saudi Aramco is responsible for the oil exploration and production in the country. Saudi Arabia’s first oil was produced from the Dammam oil field in 1938. The country’s oil and gas sector currently accounts for 90% of export earnings.

Canada’s proven oil reserves stand at 173.1 billion barrels, which are the third largest in the world. Canada produced 1.308 million barrels of crude oil per day in 2012 with 353 active rigs. 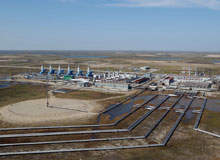 WCSB is the principal source of conventional oil production. Offshore oil production mainly occurs in the Jeanne d’Arc Basin, off the eastern coast of Newfoundland and Labrador. Hibernia, Terra Nova, White Rose and the upcoming Hebron oil field are the major offshore oil fields in Canada.

Out of 34 oil producing fields in Iran, 22 are onshore fields accounting for more than 70% of the country’s oil reserves, whereas more than half of onshore oil reserves are contained in five huge fields, which include Marun field that holds 22 billion barrels, Ahwaz field with 18 billion barrels and the Aghajari field, which contains 17 billion barrels of crude oil.

More than 80% of the onshore oil reserves are confined to the south-western Khuzestan Basin near the Iraqi border. The Ahwaz-Asmari onshore field is the largest producing oil field in Iran, followed by Marun and Gachsaran. North Azadegan and South Azadegan fields, which are due for completion by 2020, contain 26 billion barrels of proven oil reserve. Major offshore oil fields in Iran include Bahregansar, Balal, Alvand, Hengam and Reshadat.

State-owned National Iranian Oil Company (NIOC) owns and operates the Iranian oil exploration and production. The country’s first oil well was drilled in 1908 in the Masjid-i-Solaiman field in the Khozestan province of Iran. It was also the first oil well in the Middle East.

Most Iraqi crude oil production comes from the Kirkuk field in Northern Iraq, and the North Rumaila and the South Rumaila fields in the south. Other major onshore fields in Iraq include West Qurna, Az Zubair, Halfaya, Garraf, Badra and the Manjoon field, which is estimated to contain 14 billion barrels of recoverable oil. West Qurna-2 with a proven reserve of 12.8 billion barrels is believed to be the world’s second largest undeveloped field.

Most of Kuwait’s territorial oil reserves are concentrated in a few mature oil fields. The Greater Burgan oil field, comprised of the Burgan, Magwa and Ahmadi reservoirs, is the largest oil field in Kuwait. It is also considered the world’s second largest oil field, next only to Saudi Arabia’s Ghawar field. The remaining large oil fields, including the country’s second largest producing field Raudhatain and the Sabriya and al-Ratqa oil fields, are located in Northern Kuwait.

United Arab Emirates (UAE) holds the world’s seventh biggest oil reserve with 97.8 billion barrels of proven oil reserves. It produced 2.652 million barrels of crude oil per day in 2012 with 13 active rigs. The first commercial oil in UAE was discovered in 1958.

Zakum oil deposit located offshore of Abu Dhabi is one of the largest oil reserves in the Middle East. The Upper Zakum oil field operated by ZADCO contains 21 billion barrels. It is the second largest offshore oil field in the world. Other major offshore fields include the Lower Zakum, Ghasha-Butini, Nasr, Umm Lulu and Umm Shaif.

The country’s oil reserve is mainly concentrated in the West Siberia region that accounts for more than 60% of Russia’s crude oil production. North Priobskoye, Samotlor, Mamontovskoye and Salymskoye are some of the large oil fields in the region.

Urals-Volga is the second largest oil producing region in Russia. The region contains some giant oil fields such as Romashkinskoye which is operated by Tatneft. Other oil reserve containing regions in Russia are East Siberia, Yamal Peninsula, North Caucasus, Timan-Pechora and Barents Sea, and the Sakhalin Island off the coast of eastern Russia.

Majority (around 80%) of Libya’s oil reserves are in the Sirte basin located in the country’s eastern region. The other five large sedimentary basins containing oil reserves are Murzuk, Ghadames, Cyrenaica, Kufra and Libya offshore.

State-owned National Oil Corporation (NOC) carries out oil exploration and production operations in the country through its own operating entities or in participation with foreign oil companies. Marathon Oil, ConocoPhillips, Hess, Eni, Repsol and OMV are the major foreign companies with stakes in Libyan oil assets.

The country’s oil reserves are mainly concentrated along Niger River Delta and offshore of the Bight of Benin, the Gulf of Guinea and the Bight of Bonny. Nigerian oil exploration activities are currently focused in the deep and ultra-deep offshore areas, as well as in the Chad basin in the north-eastern part of the country.

Nigerian National Petroleum Company (NNPC) manages oil projects in the country through partnerships with foreign companies including ExxonMobil, Chevron, Total, Eni, Addax Petroleum, ConocoPhillips, Petrobras and Statoil. Oil and gas currently account for about 70% of the country’s exports revenue. First oil in the country was discovered in 1956.