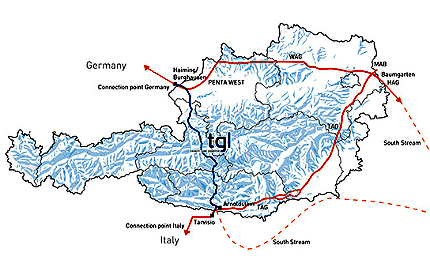 The proposed 180 mile long (290km) pipeline is more important for Austria, as it will pass through the country and form an important link with the interconnected European gas pipeline network in the future.

The project will enable continuous supply of natural gas to meet the rising demands for gas in Austria, and Europe as a whole. It gained pan-European recognition after it was included in the trans-European networks (TEN-E) by the European Commission.

The Tauern Gas Pipeline is being developed by Tauern Gas Leitung (TGL), a joint venture company led by the German gas supplier E.ON Ruhrgas (48.05%), along with five major Austrian energy companies collaborating for a majority stake.

Route details for the cross-border project

"The project will enable continuous supply of natural gas to meet the rising demands for gas in Austria, and Europe as a whole."

Austria will serve as a hub to the TGL natural gas transmission system. The project aims to link the country to the central European gas transmission network, with LNG facilities in the Mediterranean region, and the gas markets of Italy and south-rast Europe through the shortest possible route traversing across the Alps.

The pipeline will run from north to south, originating at Haiming in Bavaria, Germany, and terminating at Tarvisio, Italy, passing via Upper Austria, Salzburg and Carinthia (Austria).

It will be connected to various gas storage installations situated in the Inn region of Upper Austria. From here, it will move towards the Flachgau region of Salzburg. It will then take a southerly direction, traversing the districts of Mattsee, Seekirchen and Thalgau. Moving further, the planned route will take the pipeline through Wies and Salzach to Golling.

From Golling, the Tauern Gas Pipeline will reach the Lungau region, crossing the Lammer valley, Tennengebirge mountains and the Pongau region.

In Carinthia, the pipeline will emerge from Katschberg Pass and extend to the Radenthein-Döbriach area. After crossing a ridge, it will continue from Paternion to the lower Gail valley, via Kreuzen. A connecting line at Arnoldstein will extend the pipeline to Tarvis in Italy.

The pipeline is also scheduled to be tied with the Trans Austria Pipeline (TAP) that runs 236 miles from the Slovakian – Austrian border at Baumgarten to the Austrian – Italian border at Arnoldstein. There is also the possibility of extending the gas pipeline to Slovenia.

Following the successful completion of the project, Austria will not only be able to tap European gas but also get access to alternative sources of supply as LNG and other petroleum products are shipped to the Mediterranean region from Arabian and North African countries.

The Tauern Gas Pipeline route includes nine tunnels and ten micro-tunnels for a total distance of about 23 miles. The pipeline diameter will be approximately 900mm.

Compressor stations are planned to be built at Auerbach in the north and Feistritz an der Gail in the south of Austria.

The pipeline is designed to carry natural gas in both directions. Upon its completion, it will be able to transmit 1.3 million cubic metres of gas each hour, in either direction. The maximum operating pressure of the pipeline will be 100 bar.

The feasibility study of the Tauern Gas Pipeline was completed in the first quarter of 2011.

"The Tauern Gas Pipeline route includes nine tunnels and ten micro-tunnels for a total distance of about 23 miles."

The study has determined that it is technically feasible to install the pipeline on the formulated route over the Austrian Alps. As of mid-2012, the pipeline was in the design and permitting phase.

An environmental impact assessment (EIA) is also being undertaken to find out if the project will cause any negative impacts on the environment along the entire route.

The environmental impact statement (EIS) for the Upper Austria section has already been submitted (in June 2012). The EIS needed for the Salzburg and Carinthia sections will follow in September.

The decision to build the project will be taken on the basis of the outcome of EIA. Construction is not expected to start until 2015. Completion and commissioning will take another three years thereafter.

The Nord Stream Gas Pipeline (NSGP) project is operated by Nord Stream AG. It is a joint venture in which Gazprom holds a 51% stake, BASF / Wintershall and E.ON Ruhrgas have 20% each and the remaining nine percent stake is held by NV Nederlandse Gasunie.

Oil and gas pipelines are branching out, as more and more countries rely on imports for their energy supplies. From the Keystone XL to the Rockies Express, hydrocarbons-technology.com lists the longest pipelines in the world.

Effectively foreseeing threats to pipelines can avert spills and ruptures while saving money and lives.