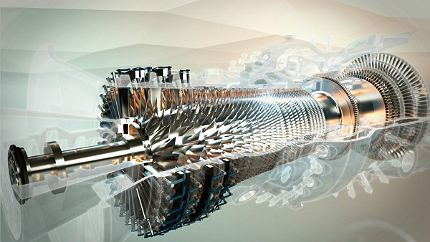 Since the 1990s natural gas has increasingly been the fuel of choice for power plants. Not only is it a cleaner fuel than coal, natural gas can also be used to generate electricity via gas turbines, a technology that has gradually become more popular as clean fuel and renewable energy takes off.

It is thought the world’s dependence on gas turbines will also increase in coming years, particularly as coal is phased out of many European countries and the US and as support for variable renewable energy output, which is also on the rise.

"It is thought the world’s dependence on gas turbines will also increase in coming years, particularly as coal is phased out."

Gas turbines work by compressing air and mixing it with fuel that is then burned at high pressure. The hot air-combustion product mixture is then expanded through the turbine section. The spinning turbine drives both the compressor section of the turbine package and a generator that converts the mechanical energy into electricity.

While a gas turbine-based power plant is relatively cheap to build compared to a coal fired plant, because gas is a premium, generally high cost fuel, manufacturers of gas turbines are on a never ending quest to increase efficiency in order to drive fuel costs down and increase output.

"Even a small improvement in efficiency is very valuable over the operating life of turbines," says Robert Ashley, a power development specialist at Mott MacDonald, a management, engineering and development consultancy.

Key areas that companies are seeking to squeeze a valuable one or two percent more efficiency out of are cooling systems for the components working in the hottest parts of the turbine and thermal barrier coatings on the same components.

"Gas turbines work by compressing air and mixing it with fuel that is then burned at high pressure."

Both of these techniques allow the turbine to operate at higher temperatures and hence with greater efficiency, while preserving component life.

In recent years effort has also been applied to increasing the operational flexibility of combined cycle gas turbine (CCGT) plants to allow faster starting and faster loading and unloading.

This flexibility is increasingly important in markets with high levels of wind and solar renewable energy generation, due to the unpredictability of the generation from these technologies.

The main players in large scale power generation gas turbine technology – Siemens, GE, Alstom and Mitsubishi Heavy Industries – have all been striving to improve efficiency in these areas, because "if any one really fell behind they would lose market share, so they really can’t afford to fall behind," Ashley points out.

Here we look at the best CCGT models available on the market today.

"Manufacturers of gas turbines are on a never ending quest to increase efficiency in order to drive fuel costs down."

The world’s largest manufacturer of gas turbines, GE, has the 7F 7-Series Gas Turbine, a 60 combined cycle plant, which is part of the FlexEfficiency* 60 Portfolio. With a net combined cycle efficiency greater than 61%, the 7F7 is one of the leading gas turbines available on the market.

Its main features include improved plant efficiency and higher output than the industry average in its class, which results in reduced fuel consumption and emissions on a MW-hr basis (2 ppm in combined cycle/ 9 ppm gas turbine only).

Significantly, it has a start time of ten minutes to base load and can ramp up at the speed of 50 MW/minute per gas turbine within emissions guarantees.

The turbine has been tested at GE’s turbine testing facility, which GE says is the most thorough gas turbine system validation in the world, located in Greenville, South Carolina.

The $170m facility allows GE to test its FlexEfficiency* 60 Portfolio turbines beyond the variances that a fleet of turbines would typically experience in the field. It also has advanced data acquisition system that allows more than 7,000 data streams to be acquired during testing.

Mitsubishi’s next generation gas turbine technology, the J series, M501J (60Hz) and M701J (50Hz), records a combined cycle efficiency of 61.5%. This is compared to around the 55% mark for previous series, G and F.

When developing the turbine the company focused mainly on increasing the fire pressure and by building on past technologies has increased the firing temperature to 1,600 degrees and 100 degrees greater than the G class series, which is enabled by advances in the advanced thermal barrier coating.

The company says the reduction of CO2 emissions is approximately 60% in combined cycle operation compared to conventional coal plants.

Mitsubishi, as part of the Japanese National Project, a research and development project started in 2004 for gas turbine technologies, improved the cooling structure of the G and J series turbines.

This is an important feature of the design because, because as Ashley points out: "If you just improve the firing temperatures without improving the cooling, components get destroyed very quickly, they don’t have a long operating life."

The US is one of the world’s major producers and users of natural gas – in 2011 the company offered the country an advanced class gas turbine, the KA24 series, for the 60Hz market.

To improve efficiency, instead of going down the traditional route of raising the firing temperature at the turbine inlet, Alstom opted for something called sequential combustion.

By injecting fuel into two combustion systems in series, it is possible to increase output and cycle efficiency without significantly increasing emissions at full and part load, because the firing temperature in the first combustor can be kept relatively low, and the second combustor does not make a substantial contribution to the level of engine NOx emissions, the company says.

The two-in-one configuration means it has the capability of producing 450MW in just ten minutes, which is particularly good for the renewable energy market which seeks maximum flexibility, as well as reduced cost for fuel and maintenance.

Particularly beneficial for the US and EU renewable energy markets is the turbine’s unique low load operation (LLO) capability. This allows operators to keep the plan in full operation.

In a ploy to make the oil business more accessible, Maersk Group has launched a downloadable ‘Quest for Oil’ video game, enabling those outside the industry to simulate some of the challenges, pressures and thrills of working in oil extraction.

Global concern over fossil fuel reserves has been the cause of significant efforts to improve efficiency, so is the wanton waste of natural gas that occurs during flaring not counterintuitive?