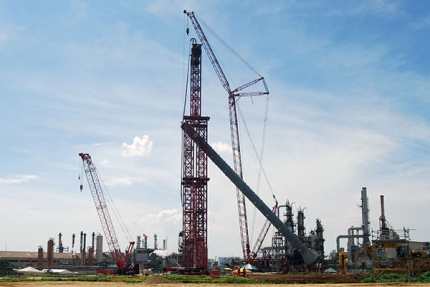 The Reficar refinery has a throughput capacity of 80,000 barrels per day (bpd), making it the biggest refinery in Colombia. A modernisation and expansion project is currently underway to increase the refinery’s capacity to 165,000bpd, developing it to become the most modern refinery in Latin America.

The project will further enable the refinery to comply with domestic and international environmental specifications, increase the refinery’s conversion capacity from 76% to more than 95% and cease production of fuel oil.

The project is currently in commissioning phase and is scheduled to come online in the second half of 2015. Up to 6,000 people were involved at the project site during the peak construction phase.

"The project is currently in commissioning phase and is scheduled to come online in the second half of 2015."

Owned and operated by Refinería de Cartagena (Reficar), an affiliate of Ecopetrol, the refinery is located within the Mamonal Industrial Area, approximately 15km south of the city of Cartagena. The expansion is being performed in a 135ha site located to the east of the existing facilities.

The overall cost for the refinery expansion and modernisation project is estimated to be $3.89bn. Export credit agencies including Export-Import Bank of the United States (US EXIM), Servizi Assicurativi del Commercio Estero (SACE), and Exportkreditnamndem (EKN) and commercial banks including The Bank of Tokyo-Mitsubishi UFJ, Banco Bilbao Vizcaya Argentaria, HSBC Bank USA National Association and Sumitomo Mitsui Banking Corporation have provided $3.5bn financing for the project.

The refinery uses 85% of domestic crude and 15% of imported crude, as well as exports approximately 47% of its products. Natural gas is transported to the site by Promigas and water is supplied by Agua de Cartagena (ACUACAR).

Talara, Peru’s second biggest oil refinery base on production, is located 1,185km away from Lima, the capital of Peru.

The project required approximately 165,000m³ of concrete, 31,000t of structural steel, 640,000m of pipe, and more than 4.8 million cubic metres of cable and wire during the construction phase.

The engineering, procurement and construction (EPC) contractor for the project is Chicago, Bridge & Iron (CB&I), while the project management consultant (PMC) is Foster Wheeler. Major technology licensors for the project include CB&I, UOP, Merichem and KBR.

The electrical and instrumentation installation contract for the project was awarded to Kentz Caribbean Sucursal Colombia, who worked in collaboration with GMP and MASA.

The heavy-lift and transport activities were performed by Mammoet employing 121 cranes, 154 axle lines of self propelled modular trailers (SPMTs), 48 lines of conventional modular trailers, and a 900t gantry lift system.

The hydrotreating tower was supplied by Hitachi Zosen. Siemens was contracted to provide integrated solution for the process and wastewater treatment facilities. The chemical cleaning works for the project were performed by Grupo Solarca.