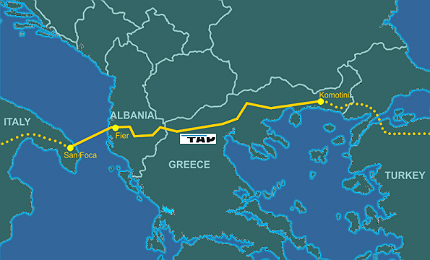 A rise in shale oil production boosted US crude oil output to a 20-year high in 2012, a report from the The Energy Information Administration (EIA) revealed last month.

The report said this is the first time any US monthly oil output was above seven million bpd since December 1992, while crude oil production for December 2012 was even higher at 7.030 million bpd, posting a 16.7% rise from a year earlier.

Shell also announced it is planning to use natural gas as a fuel in its own operations.

The new fields were discovered in Egypt’s Nile Delta Basin, during the company’s 2012 multiwell drilling programme.

Iran and Pakistan last month officially inaugurated the construction phase of a gas pipeline project, which will bring Iran’s gas reserves to Pakistan.

The project, which was conceived during the early 1990s, aims to deliver 750 million cubic feet of gas per day from Iran’s South Pars field to the Pakistan-Iran border, via a 56in 1,150km pipeline. It is expected to be completed in 2015.

The new laboratory will enable equipment manufacturers and oil and gas companies to test, validate and calibrate multiphase technologies, such as separators and flow meters, which will allow measurement and trading of gas.

The new facility will help to increase the accuracy of future multiphase flow meters and the efficiency of multiphase separators.

In March the UK Government introduced a series of new tax breaks in its 2013 budget, to encourage shale gas exploration in the country.

The measures were announced in the annual budget speech to parliament by UK Chancellor of the Exchequer George Osborne.

The measures proposed by the Chancellor include new planning guidance, tax breaks for fracking companies and incentives for local communities, which are expected to relax public opposition to hydraulic fracturing or fracking.

Russia-based Rosneft paid $16.65bn to UK-based BP, as part of the sale and purchase agreement of TNK-BP, which was announced in October 2012.

The Albanian Parliament approved the Intergovernmental Agreement (IGA) signed between Albania, Italy and Greece, related to the construction and operation of the Trans Adriatic Pipeline (TAP) project.

The agreement was signed in Athens, Greece, on 13 February 2013.

In Mexico, Pemex’s HQ was rocked by an explosion that killed 25 people, meanwhile Greece, Italy and Albania signed an agreement to support the Trans Adriatic Pipeline project and Gran Tierra Energy started production in Peru.