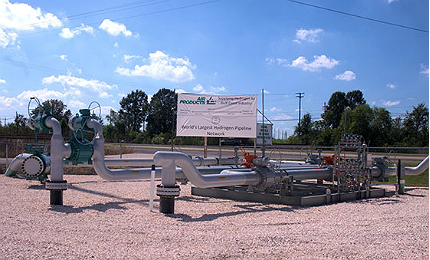 Air Products expanded its hydrogen supply network through the Gulf Coast Connection Pipeline Project, in anticipation of an increase in hydrogen demand along the Gulf Coast. The project, which was completed in October 2012, created the world’s largest hydrogen pipeline supply network, with a total capacity of one billion standard cubic feet per day (SCFD).

With the completion of the project, Air Products has become the first hydrogen supplier to have an extensive network across the Gulf Coast. The pipeline won the Premier Project Award for Construction at the 2012 Platts Global Energy Awards.

The project is part of an extensive strategy to strengthen Air Products’ operations in Texas. The company recently purchased a hydrogen production plant in Corpus Christi and also built a new air separation unit in La Porte. Air Products is also undertaking the construction of a new carbon capture plant in Port Arthur, which will help energy companies improve oil recovery.

Air Products announced its decision to construct the pipeline in October 2010. Pipeline route selection and right of way acquisition had already been completed in January 2010.

By May 2012, 95% of the pipeline was installed and backfilled. The pipeline and compressor stations were mechanically complete by August 2012. The project required more than100,000ft of directional drilling, 25,000 welds and installation of more than 24,000 pipe sections, each 40ft in length.

The project presented number of challenges during construction while managing the constant changes in the pipeline route. Engineers and workers had to work near rivers, swamps and highway crossings to complete the project.

Construction of a new customer service centre (CSC) at Pasadena, Texas, was also part of the project. The CSC works in coordination with the operations service centre and enables Air Products to monitor the pipeline operations. It helps in meeting consumer demand and ensuring safety and efficiency of the entire network. The project employed about 900 people during the construction period.

Resource Environmental Solutions was contracted to carry out wetland mitigation activities for the project. Bayou Companies, a unit of Insituform Technologies, was contracted to provide corrosion coating, welding and logistics support for the pipeline.

Hydrogen is used by petroleum refiners to remove impurities, such as sulphur and olefins, from crude oil.

"Air Products has become the first hydrogen supplier to have an extensive network across the Gulf Coast."

Hydrogen is also used by chemical industries in the manufacture of semiconductors, window glass and so on.

The project has helped in uniting Air Products’ east and west coast pipeline systems. This will ensure constant supply of hydrogen to the company’s refinery and petrochemical customers and eliminate disruptions.

A combined system will also reduce the overall operational cost, increase reliability since hydrogen is sourced from various locations and also provide flexibility of operations for Air Products. The project will also support future growth and provide expansion opportunities.

Air Products minimised the environmental impact of the project by carrying out unique wetland mitigation activities. The company bought more than 200 acres of wetlands for preservation and to improve the Tony Houseman Wildlife Management Area. It also converted 150 acres of privately-owned land into wetlands and is planting hardwoods and bald cypress.

The 780.5km long Gulf Coast Pipeline is being constructed by TransCanada, a North American energy company based in Calgary, Canada.

Gulfstream is a high pressure natural gas pipeline system that carries gas from the Mobile Bay area of the US Gulf of Mexico (USGoM) to Florida for distribution.