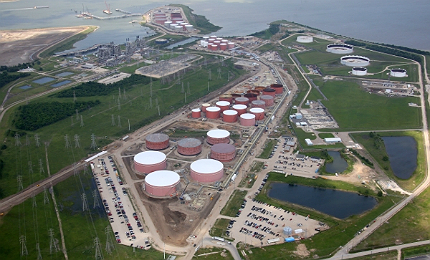 Kinder Morgan Partners holds a 55% interest in the project, while the remaining 45% interest is held by TransMontaigne Partners.

The estimated investment on the first and the second phases of the expansion are $425m and $54m, respectively.

The construction was carried out by employing approximately 750 local contractors. The terminal facility employed 75 full-time employees upon the start of operations. The total storage capacity of the terminal is 7.1 million barrels.

"Kinder Morgan Partners holds 55% interest in the project, while the remaining 45% interest is held by TransMontaigne Partners."

TransMontaigne Partners initially acquired 190 acres of undeveloped land on the Houston Ship Channel in November 2010 to build the terminal.

The design and permitting activities, including initial preparatory works for the project, were carried out in 2010 and early 2011.

The project site covers an area of approximately 185 acres of land and waterfront. The terminal facilitates storage, blending and handling of residual fuel, feedstock, distillates and other black oils.

The products are brought into the terminal via ships, barges and rail cars while exportation of the products is done by ships and barges.

The first phase of the project includes 51 storage tanks that have a combined capacity of 6.5 million barrels. It also involved the construction of deep draft docks to enable the largest ships to access the channel. The sizes of the storage tanks vary from 30,000 barrels to 320,000 barrels.

"The estimated investment on the first and the second phases of the expansion phase are $425m and $54m, respectively."

The two docks at the project site are capable of handling large ships with a length of 1,000ft, a beam of 168ft, a draft of 45ft, and displacement tonnage of 205,000 metric tonnes. An electrical substation, bridges and an office building were also constructed as part of the project.

Future expansion at the terminal will encompass the third phase of the project. The third phase is expected to add 3.7 million barrels capacity, including new pipeline connectivity.

The terminal will also be served by Highways 225 and 146, and East Sam Houston Tollway in the near future. An additional ship dock will also be constructed, which will provide berthing for two ships and four more barge spots.

The capacity of the rail siding will also be increased to facilitate unloading activities for 30 rail cars. A truck rack to accommodate four trucks will also be provided.

The 780.5km long Gulf Coast Pipeline is being constructed by TransCanada, a North American energy company based in Calgary, Canada.

LNG is one of the major fuels of the future, and the construction of LNG regasification facilities across the world is increasing.