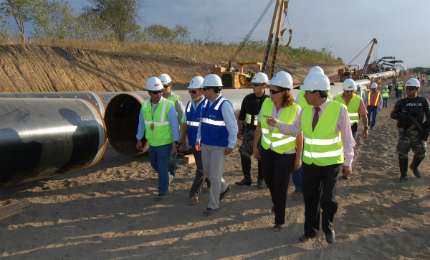 The Pacifico Eloy Alfaro Refinery and Petrochemical Complex (Pacific Refinery) is being constructed at El Aromo, Manta, in the province of Manabi, Ecuador. It represents the biggest investment in Ecuador’s history, and will be the biggest refining complex in the Pacific coast when it comes online in 2017.

It is expected that the $12bn project will increase the country’s crude oil treatment capacity to 500,000 barrels per day (bpd) and save the country approximately $3bn a year in purchasing crude products.

Initially, the project will process Ecuadorian crude and is expected to subsequently process crude produced from the Ayacucho Block 5, which is being jointly developed by Ecuador and Venezuela.

Total’s Antwerp complex is located in the port area of Antwerp, Belgium, and comprises a refinery, the Fina Antwerp Olefins plant and a polyethylene plant.

Ecuador and Venezuela signed a memorandum of understanding (MoU) for the implementation of the project in August 2007.

An environment monitoring centre near Manta was opened in July 2008. Refineria del Pacifico Eloy Alfaro (RDP-CEM) was formed for the implementation of the project, followed by the official launch of the project.

China National Petroleum Corporation (CNPC) and Industrial and the Commercial Bank of China (ICBC) signed a letter of intent with Ecuadorian authorities to finance the project in February 2012.

CNPC entered a framework agreement with the Ecuadorian authorities to hold a share in the construction of the complex in June 2013.

Details of the Ecuadorian refinery and petrochemical complex

The project site covers an area of approximately 700ha, and the Pacific refinery will have an ultimate crude processing capacity of 300,000bpd.

Construction of the complex will be carried out in two phases. The first phase will have a nameplate capacity of 200,000bpd, which will be increased by 100,000bpd in the second phase.

Up to 150,000bpd of oil processed from the first phase will be used for local consumption, while the remaining 50,000bpd will be exported.

The refinery and petrochemical complex will implement deep conversion technological processes and produce 87,700bpd of petrol, 171,400bpd of diesel, 7,400bpd of liquefied petroleum gas (LPG), 6,000bpd of jet fuel, 2,500bpd of benzene, and 4,600bpd of xylene, as well sa 100t per year of polypropylene, coke and sulphur.

Associated facilities for the Pacific refinery

As part of the project, a 93km aqueduct is being constructed with an investment of $260m, to supply water to the project site from the La Esperanza dam. Carbon steel pipes measuring 48in in diameter and 12m in length are being imported from China for this purpose.

The aqueduct will have a capacity to supply 5,500m3 per hour of raw water, of which the excess 2,000m3 per hour of water from the facility will be supplied to the municipalities of Manta, Montecristi and Jaramijó. The facility is expected to come online in February 2016.

Construction of the access roads and a preliminary camp at the site for 840 people was completed in 2014. The project will further involve the construction of marine facilities, a desalination plant, offshore facilities, storage tanks for gasoline and diesel, and storage area for crude and petrochemical products.

Lurgi, UOP, KBR, Linde, Haldor Topsoe, Shaw, Chevron Lummus Global, Axens, and Foster Wheeler had submitted their bids in 2009 to supply the technology for the process units at the complex.

Contractors involved with the integrated refining and petrochemical complex

A front-end engineering and design (FEED) study for the project was performed by SK E&C under a contract worth KRW 320bn (approximately $260m). The company subcontracted Technoconsult to perform the basic engineering and pre FEED activities.

SK E&C is also expected to become the engineering, procurement and construction (EPC) contractor for the project.

The project management consultancy contract for the development was awarded to WorleyParsons in November 2011. The environmental impact study was performed by ACOTECNIC Cía, assisted by Consultoracav and Instituto Oceanográfico de la Armada (INOCAR).

Norberto Odebrecht is constructing the aqueduct and is also performing the early site works for the project. AURA provided its AuraPortal business process management (BPM) system for automation of the refinery’s processes.